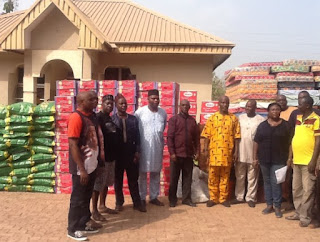 Senator David Mark on Sunday donated relief materials to the displaced people from Agatu Local Government Area of Benue State.He donated rice, indomie, vegetable oil, mattresses, mats, blankets salt and buckets.
The materials were handed over to  John Ngbede, the representative of Agatu people, by Dr. Adakole Elijah who represented David Mark at the event.Speaking while handing the materials to Agatu people,Dr. Adakole expressed sympathy with the people over their plight and urged them to look unto God even in the present condition.

He also said he is optimistic both the state and federal governments will address the menace and also alleviate the pains of the displaced Agatu people.Senator Mark  also expressed confidence in the ability of the Nasarawa State government to reciprocate the gesture by cooperating with the Benue State government in its move to put an end to the hostility.
Loading...
">
Newer Post Older Post Home
Comment Form is loading comments...