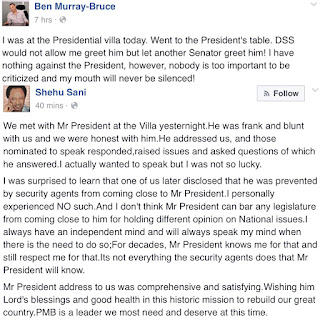 Senator Ben Bruce, the lawmaker representing Bayelsa central senatorial district, has alleged that the Department of State Services (DSS) yesterday prevented him from greeting President Muhammadu Buhari at a dinner organised for National Assembly members.
The dinner was organised to mark the 2016 Democracy Day, and further to appreciate the National Assembly Leadership.
Known for his critical stance on government and criticism of Mr. Buhari, the senator took to his social media page to let his followers know.


"I was at the Presidential villa today. Went to the President's table. DSS wouldn't allow me greet him but let another Senator greet him!," he wrote.
Another Senator who was present at the meeting has denied such claim.According to Senator Shehu Sani,

he was surprised that Ben Bruce made such claim.Read what he said above