Chilling moment Harambe, the Gorilla was shot dead after it dragged 4-year-old toddler for 10mins 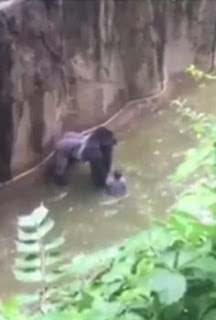 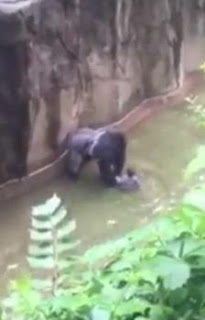 This is the chilling moment Harambe, a 400 pounds Gorilla dragged a lil 4-year-old toddler a railing who fell into the gorilla exhibit's moat for about 10 minutes before it was shot by the zoo officials. The incident has generated fury on the internet as many has blamed the parents of the toddler for neglecting the child leading to the death of Harambe.

Eyewitnesses said the small child said he wanted to get in the water before the incident, to which the mother, who was also watching several other children, replied: 'No, you're not, no, you're not,' according to one witness Kim O'Connor.

The zoo's animal response team assessed the 'life-threatening situation' and defended their decision to shoot Harambe rather than tranquilize him, but thousands took to social media to call it a 'murder'