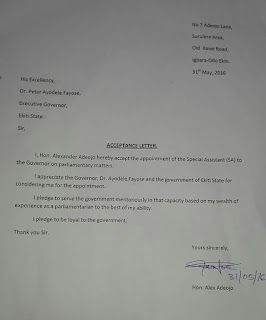 Ajibola, in his letter of resignation, said he had to quit because of some “basic developmental issues and the economic situation in the state” which he could no longer pretend over.

In his letter dated May 28, Ajibola said, “I humbly write this to formally notify you that I am resigning from my position as your S.A on Parliamentary Affairs.

“Sir, within my personal conviction, I am satisfied that I have in honesty and utmost loyalty served the PDP, the people of Ekiti and government in general.

“Therefore, I premise my resignation on some basic developmental issues and the economic situation in the state which I cannot continue to pretend over. My resignation takes off immediately.”

The Ekiti State Governor, Mr Ayodele Fayose, has however approved the appointment of Hon. Alexander Adeojo as the Special Assistant to the Governor on Parliamentary Matters.The appointment of Adeojo resulted from the resignation of Hon. Samuel Oyedele Ajibola from that position.

In a statement on Tuesday by the Chief Press Secretary to the Governor, Mr Idowu Adelusi, the appointment of Adeojo takes immediate effect.

Meanwhile, the governor has thanked Ajibola for his meaningful contributions to the administration and development of the state while he was Special Assistant, Parliamentary Matters to the Governor.

The governor also wished him the best of luck in his future political endeavours.

See the letter of acceptance of the new assignment by Hon. Adeojo above