The management of the Central Hospital, Agbor has called on the general public requesting for the identification of an accident victim brought unconscious to the hospital.The victim who is suspected to be within the age bracket of 18-20, was brought to the hospital by officers of the Fed Road Safety, Agbor Unit command without any details of his name/parents.The victim was badly injured to the extent of having one of his legs amputated.

The young man is a victim of a hit and run car. He was brought to the Emergency Ward late hour of the fateful day while the hope of having his relatives to come for him was dashed.It was reported to the appropriate authorities.

The Permanent Secretary of the Delta State Ministry of Health through the kind gesture of the His Excellency the Governor of Delta State, Senator Dr. Ifeanyi Okowa, provided necessary items used in resuscitating him.First was with six pints of blood before a major medical surgery was done on him.

His left leg from the knee downward was badly crushed and the only option left to save his life was to have the affected area amputated. 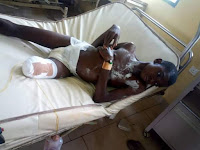 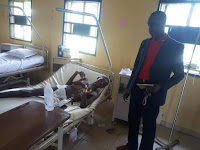 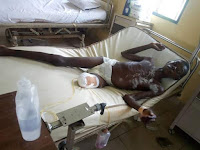 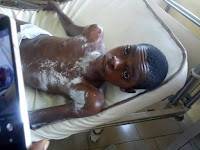