Gallant troops of 7 Division Garrison carrying out cordon and search operations in conjunction  with troops of 195 Battalion, Mobile Policemen and CJTF, in some parts of the fringes of Maiduguri today discovered and arrested a wanted Boko Haram  terrorists group member called Babagana Abubakar (aka Alagarno), hiding at Bulabulim  Ngarnam community. He was found hiding in a room in possession of  2 military Ballistic helmets, a pair of military desert boot, a fragment jacket, a Jersey pull over, military backpack, camouflage design  shorts, 2 voters identification cards, National identification card, amulets, camouflage T-shirts and military jungle hat. He has since been moved out of the area for further interrogation.
The Acting General Officer Commanding 7 Division,  who is also the Commander, Sector 1 of Operation LAFIYA DOLE had visited the troops and conveyed the Theatre Commander, Operation LAFIYA DOLE's commendation to them for the painstaking efforts and professionalism .
You are please requested to disseminate this information to the public through your medium.
Thank you for your kind cooperation. 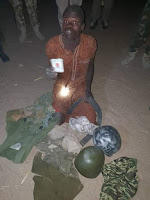