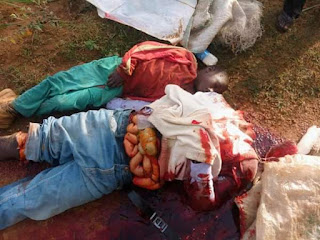 On Sunday 14/7/2019 suspected Fulani herdsmen killed a 46 year old Thomas Wollo and his 7 year old son, Nggwe Thomas at about 8:50pm in Tafigana village of Bassa Local Government Area.
The two attended choir practice with their parish members, but as they left the parish to go back home, they were killed with the father beheaded in cold blood by their attackers just few meters to their house.
Narrating the event, a resident of the community, Bitrus Izah told Zongo Lawrence, the Publicity Secretary of Miango Youth Development Association that at about 8:50 pm, they heard gunshots, followed by a chant of "Allahu Akbar", and as they rushed out, they saw two dead bodies of a father and his son.
According to Lawrence, the community has been experiencing attacks by the herdsmen for a while, especially on Thursdays and Sundays, which are worship or market days.
In another sad event, Lawrence said the attackers invaded another village in Hukke and destroyed farm produce worth a fortune.
He called on the attention of the government to look into their situation and the unlawful killings in their communities as they are left without rescue.
17 people according to him lost their lives this year alone in different attacks perpetrated by Fulani herdsmen.
May the souls of the departed rest in peace.
Image Credit:Fdn 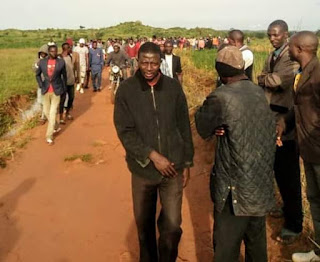