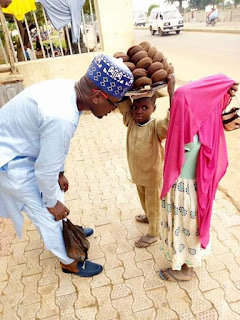 As shared by Suleiman.....
'A few weeks back I found these two kids hawking Mazarkwaila (sugar cake sort of) on the street of Kofan Doka in Zaria. Looking at their ages, I had to park and walked to the other lane in order to catch up with them, as I was driving on the opposite lane. I stopped them and requested to know their area of residence, name of their parents and their own names. They were able to answer all the questions satisfactorily except the first question. They were able to give the name of their area of residence without giving a hint on how to locate their house, as they are too young to do that. I further asked how much is the value of the whole Mazarkwaila being carried by the boy (as depicted in the photo below), surprizingly the value was 2500 naira only. I nearly shed tears looking at the money vis-a-vis the risk they were being exposed to. I gave them 3000 naira and told them to go back home. Thereafter, I placed a phone call to someone I know that lives in the same area with them and told him  that I will send some photos to his watsapp and that he should help me locate the parents of those kids.
Happily the man (Audun Durimi) called back a day after to say that he was able to locate them. He sent the phone number of their father to me. I called the father and put some reasonable words regarding the ills of street hawking on children and he completely agreed with my submission. I asked him why are his children not going to school, he said he had to remove them because of his economic situation. I requested for his permission to enrol them, he outrighly accepted.
I am happy to inform you that, today I enrolled Aisha and Isah into the ZEDA model schools. It is a new school that will start operation tomorrow Monday. Aisha and Isah will be part of the pioneer students of this school established by the Zaria Education Development Authority. Their mother is the one standing first from right. May Allah bless these kids, may Allah see them through. I am so happy today. Alhamdullilah' 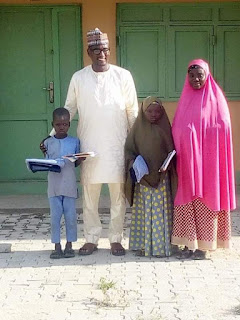 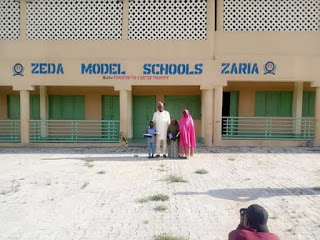 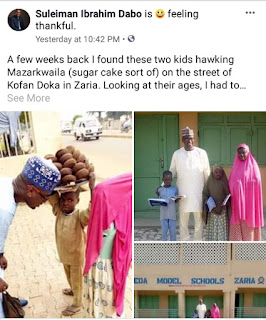