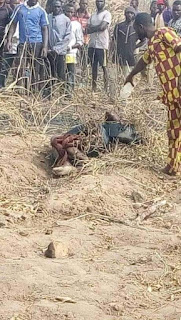 Information reaching me  has it that angry youths set a suspected thief ablaze in Korinya in Konshisha LGA of Benue State for allegedly attacking and snatching money and other belongings from a businessman named Terna Orakaa alias Spanner.
The thief is identified as Nator Ioryue popularly called Natooo.
A Korinya resident said that Mr Terna was attacked in the night  by Nator and his gang on his way home.
''They blocked the road leading to spanner's house at two different points.
"Spanner however,managed to escape the first barricade but was unfortunately caught up in the second. Eye witness report indicate thatthey rushed on him when he accidentally came into them. Spanner was closing from his shop in company of his daughter who has been helping him with the sales. She however managed to run leaving her dad to the mercy of the robbers. Some of them wanted him killed but others declined , citing that they will always come back if he is still alive." .
''That night, intelligence was gathered and the gang was arrested by members of SARS attached to the Ihugh Division of the Nigeria Police Force.
''It should also be recalled that, spanner's shop has constantly come under attacks for the past four to five months of last year. The attacks became incessant to the limit he reported the matter to his parish priest. He prayed for him and warned that any further attack on the shop will spell doom for the attackers.
''The robbers were locked at Korinya Police Station but Korinya  youths forcefully broke into the Korinya-City Police station chanting songs of victory, they led him away and gave him a jungle justice.''
It has been documented that Nator's name always sends shivers down the marrows of people in the area. He always plays a God who can do and undo. Information has it that he has been destabilizing the areas since time immemorial.
History has it that Nator has set many thieves ablaze for terrorizing Korinya City and its environs but youths shouted in unison that it is his turn. 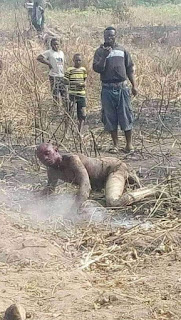 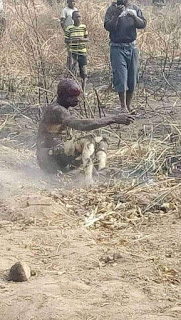 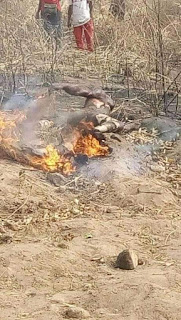 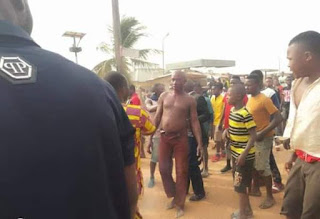