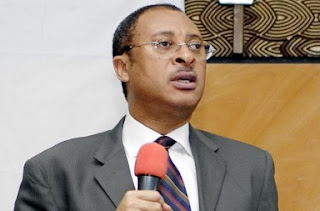 Founder, Lagos Business School and Professor of Political Economy, Pat Utomi, has said if the current administration fails to tackle the fundamental problems of the economy, Nigerians may be forced to queue to buy salt.
Speaking on Thursday, February 25, on Channels Television's Sunrise Daily, Utomi said the government needs to deal with the fundamentals of a producing economy.
He said Nigeria should "learn from history" to fix the problem facing our economy.
A similar economic crisis in the early 1980s saw Nigerians queue up to buy essential commodities such as milk and rice because the foreign reserves were down and importers could no longer access forex.
"If you go back, it is good to go back, there is nothing new about what we are experiencing, it has been experienced in history. So if we can draw lesson even from our own history and what is going on elsewhere," he said.
"I came home from grad school to Nigeria in 1980 and people were pouring Champaign into bucket of water and washing their hands in it.

"I mean that kind of madness needed ultimately to be reined in and when supply crashed and reality was beginning to settle, we said we don't devalue, that time our currency was a block currency was just determined from the Central Bank, it was a block currency.
"So central bank will say this is our currency and we continue to say this is our exchange rate we will not devalue, we were not changing the fundamentals of our economy, we were still mono-product, we were still dependent, were not selling.
"And one day Central Bank of Nigeria could not pay due credit from all those who have supply arrangement with Nigeria and they stop supplying Nigeria and a few month later what were we doing, we were queuing up to buy sugar. It was called essential commodities, we were queuing up to buy salt.
"If we don't deal with the fundamentals we will queue again. It is not a matter of exchange rate. We are talking about symptoms; let's deal with the fundamentals of a producing economy, diversifying the base of our economy which is not a light bob that you can switch on and off.
"We need to be working on critical issues, the fundamentals of our economy; right now Nigeria economy to be very fair is a lot more diversify than people realize, most of it has happened without any serious incentives, plans or anything.
"I mean we base our GDP and nollywood and co came into big play, nobody worked a strategy for that industry, just out of work fellows in television and whatever picked up their cameras and began to shoot this things, people laughed at first and it became an industry.
"How do you creative incentives for those kinds of things to become real industry? Those are the issues that are really at stake. We must continue this conversation so that the incentives that are coming will be clear to people
Loading...
">
Newer Post Older Post Home
Comment Form is loading comments...