Doyin Okupe blasts VP Osinbajo: ‘You lied in a church’ 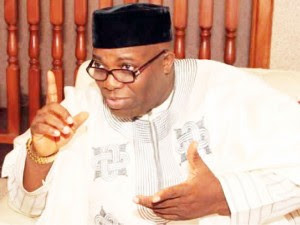 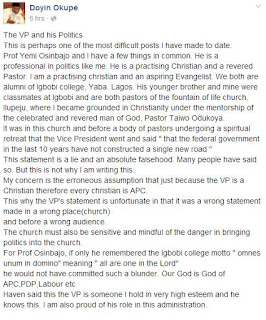 Former Senior Special Assistant on Media and Publicity to ex-President Goodluck Jonathan, Dr. Doyin Okupe, on Sunday, described the recent statement credited to vice President, Yemi Osinbajo, that no new road has been built by government in the last ten years as "a lie and an absolute falsehood."
While expressing regrets that the statement was made in a church, Okupe, who stated this on his Facebook page, said that the church has a role to play in politics and that Osinbajo was wrong in assertion.
The former Presidential aide wrote that: "This is perhaps one of the most difficult posts I have made to date."
"Prof Yemi Osinbajo and I have a few things in common. He is a professional in politics like me. He is a practising Christian and a revered Pastor. I am a practising christian and an aspiring Evangelist."
"We both are alumni of Igbobi college, Yaba. Lagos. His younger brother and mine were classmates at Igbobi and are both pastors of the fountain of life church, Ilupeju, where I became grounded in Christianity under the mentorship of the celebrated and revered man of God, Pastor Taiwo Odukoya."
"It was in this church and before a body of pastors undergoing a spiritual retreat that the Vice President went and said that the federal government in the last 10 years have not constructed a single new road."

"This statement is a lie and an absolute falsehood. Many people have said so. But this is not why I am writing this. My concern is the erroneous assumption that just because the VP is a Christian therefore every christian is APC."
"This why the VP's statement is unfortunate in that it was a wrong statement made in a wrong place(church) and before a wrong audience."
"The church must also be sensitive and mindful of the danger in bringing politics into the church. For Prof Osinbajo, if only he remembered the Igbobi college motto " omnes unum in domino" meaning " all are one in the Lord, he would not have committed such a blunder."
"Our God is God of APC, PDP, Labour etc. Having said this the VP is someone I hold in very high esteem and he knows this. I am also proud of his role in this administration."
Loading...
">
Newer Post Older Post Home
Comment Form is loading comments...