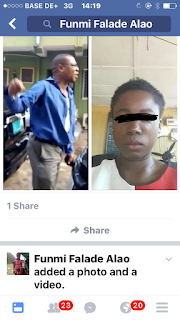 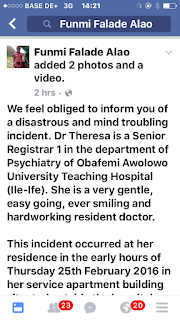 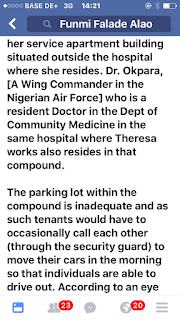 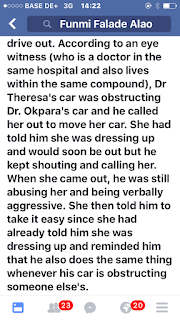 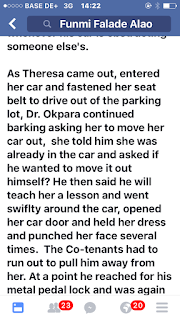 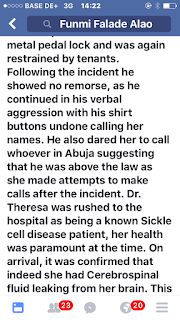 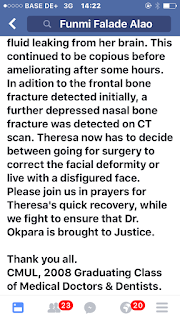 According to Funmi Falade, 2008 Graduating Class of Medical Doctors & Dentists, "Dr Theresa is a Senior Registrar 1 in the department of Psychiatry of OAU Teaching Hospital (Ile-Ife). This incident occurred two days ago in her house.
Dr. Okpara, [A Wing Commander in the Nigerian Air Force] who is a resident Doctor in the Dept of Community Medicine OAUTH, also resides in that compound. The parking lot within the compound is inadequate and as such tenants would have to occasionally call each other to move their cars in order to drive out.
According to an eye witness, also a doctor, Theresa's car was obstructing Okpara's and he called her out to move her car. She had told him she was dressing up and would soon be out but he kept shouting and calling her. When she came out, he was still abusing her and being verbally aggressive.
She then told him to take it easy and reminded him that he also does the same thing whenever his car is obstructing someone else's. As Theresa entered her car to drive out, Okpara still continued shouting, she told him she was already in the car and asked if he wanted to move it out himself?


He then said he will teach her a lesson and went swiftly around the car, opened her car door and held her dress and punched her face several times. The Co-tenants had to run out to pull him away from her. At a point he reached for his metal pedal lock and was again restrained by tenants.
Following the incident he showed no remorse, he also dared her to call whoever in Abuja. Theresa was rushed to the hospital where it was confirmed that she had Cerebrospinal fluid leaking from her brain. This continued to be copious before ameliorating after some hours.