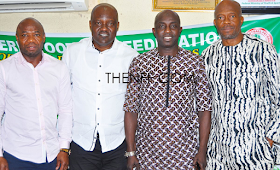 The Nigeria Football Federation has re-appointed Samson Siasia as the Coach of the Super Eagles following the resignation of the Sunday Oliseh on Friday.

Siasia, whose contract as Eagles coach was terminated in October 2011 following the team's failure to qualify for the 2012 Africa Cup of Nations, will be assisted by Salisu Yusuf, who assisted Oliseh, 2015 FIFA U-17 World Cup winner, Emmanuel Amuneke, and Alloy Agu for the upcoming 2017 Africa Cup of Nations qualifiers against Egypt.

The appointment was announced by the NFF following the recommendation of the NFF Technical and Development Committee, which held an emergency meeting after Oliseh's resignation.