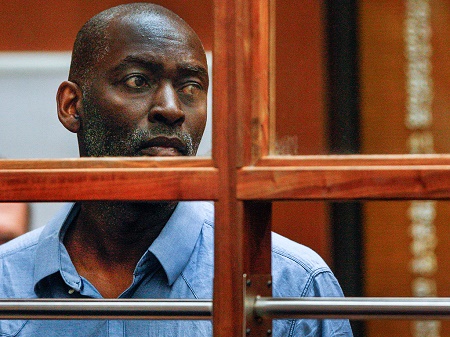 Actor Michael Jace was convicted Tuesday in the fatal shooting of his wife April Jace at their Los Angeles home in front of the couple's two young sons. The verdict was announced Tuesday after a weeklong trial.

A jury of six women and six men deliberated for around two hours before finding Jace, 53, guilty of the second-degree murder of his wife on May 19, 2014. According to the Los Angeles County District Attorney's Office, he faces 40 years to life in state prison, PEOPLE reports.

The actor, who portrayed LAPD officer Julien Lowe on the FX television seriesThe Shield, was upset his wife wanted a divorce, Deputy District Attorney Tannaz Mokayef told jurors in opening statements.
Jace waited in their home and when April arrived, he shot her once in the back, the prosecutor said. The actor then shot her two more times in the legs in front of their sons, who were 8 and 5 at the time.
Jace called 911 himself and told the operator he shot his wife, according to evidence presented at trial. Her body was found inside the couple's home along with their two children, who were unharmed.
Jace, who has remained in custody since his arrest, is scheduled to appear for sentencing June 10.

April was a Biola University counselor, and after her death the school established a scholarship in her name. The scholarship awards "underrepresented students serving or planning to serve in an urban context who have experienced or witnessed violence in their home or neighborhood."
"April was a very joyful person," Jonathan Seruyange, associate director of financial aid at Biola University, previously told PEOPLE. "She was very caring. Very joyful. Always ready to joke and laugh with people. She was easy to get to know."

"She was really well-loved across the campus," said Seruyange. "Hearing about that kind of thing happening to someone well loved was a huge shock and something that our office all took very hard."
Loading...
">