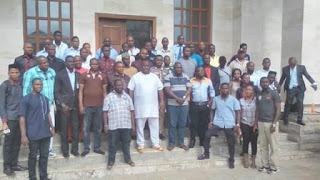 The chairman and chief executive officer of Capital Oil and Gas, Chief Ifeanyi Ubah who is also the publisher of Authority Newspaper said he is passionate about putting Anambra state on globe.

Chief Ubah said this yesterday in his Umuanuka, Otolo-Nnewi residence during a chat with media practitioners.

He pointed out that the welfare of the people of the state is so paramount to him and as such has decided to give something back to the society.

"I am one of the most affluent personalities in Nigeria today but at a point in my life, I never believe I could have N5000 in life but now the story has changed for the better, we talk in million today if not billions, the only way to show gratitude to God is to extend his goodness upon me to others.

"Go to any village in Anambra state, I make bold to claim that none of them can compare with Umuanuka, if there is any tell me. If we have done that in my village, what do you think of the world we are trying to build for the state, we have seen Japan, we have seen Dubai, it is my intention to replicate what I have seen in those places here.

"At 21, I built my own house here, its a storey building, married to a rich man's daughter when my father's house was even a mud house but she left her father's house and accepted me. It is all about being focused and determined to succeed. I am determined to put Anambra state on the world map.

Chief Ubah who said he has always been interested in adding value to Anambra state in everything he is doing pointed out that he decided to invest into football, build a games village , floated a newspaper which is doing very well by all standard and also setting up two FM radio stations which according to him is part of his determination to bring innovations into journalism and broadcasting.

The publisher of the Authority Newspaper said that he is prepared to employ seven hundred and seventy six bloggers in all the local government areas of the federation so that his newspaper can better be equipped to do on the spot reporting.

He said he is making youth empowerment and employment his focus because of his realization that a lot of evil is pervading the society due to idleness noting that an idle hand will automatically be the devil's workshop.

"Things are so hard for people in Nigeria and it is our desire to alleviate their sufferings through what we are doing, imagine a graduate of ten years standing coming to beg to be our vendor. If that man fail to get the job only God knows what will follow next, we intend to give hope to the hopeless.

"Anambra families will soon start producing footballers for the world through the academy we are setting up, we intend to partner with European and Asian club, in the process top flight players will be attracted to come and play in Anambra state.

"Players in the academy will have opportunity to learn play football, study foreign languages so that even if they fail to play football later in life, they can become ambassadors and be useful not only to themselves but the entire society.

The CEO of Capital Oil and Gas said he intend to institute entrepreneurship youth summit once job is completed in the games village in Nnewi so as to give budding and youthful entrepreneurs opportunity to do things in a better way.

He pointed out that he has taken the Anambra state FA to a befitting secretariat moments after he was elected chairman noting that youth football, women football, traders' tournament and other activities that will positively engage the Anambra youths would soon be unfolded.