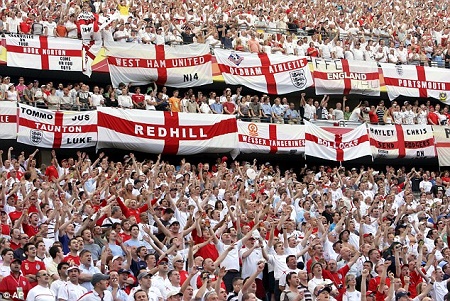 A data discovered from the laptop used by the Paris attacker, Salah Abdeslam that ISIS is planning to attack England supporters next month as they converge in Marseille to follow the Three Lions at the Euros.  The data shows ISIS wants to use suicide bombs, assault rifles and even drones carrying chemical weapons to carry out the attacks.

The data included photographs and mention of the French city's Old Port, where England fans will gather for their opening game against Russia in an official fan zone.

Security chiefs also fear a repeat of Paris in November, when coordinated groups of ISIS killers gunned down people in the streets, according to The Sun.

A Belgium security source told the paper: 'This can only mean plans were being drawn up to attack England and Russia fans before the game. Abdeslam is under lock and key but there are others at large who are equally fanatical and could strike. England and Russia fans are obvious targets, because both countries are bombing ISIS in Syria and Iraq.'

The laptop was seized during raids that led to Abdeslam's arrest in Molenbeek, Brussels, in March.