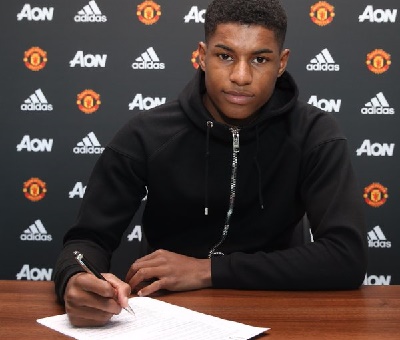 Marcus Rashford has signed a new contract at Manchester United which keeps him at the club until at least June 2020 with an option to extend for a further year. Rashford,18, came through the ranks of our academy and was handed a first-team debut for the Europa League game against Midtjylland.

He grabbed his opportunity with both hands by scoring twice, a feat he remarkably repeated three days later on his first league appearance against Arsenal. Marcus has made 17 appearances and scored 8 goals.

"Marcus is a naturally talented footballer with great potential. He has taken his chances well and has integrated into the first team very quickly. I am delighted that Marcus has signed a new contract, he is at the right club to continue his development. He is still very young and we need to be patient but he is developing in the right way and we believe he has a great future ahead of him."

"I am delighted to have signed a new contract. I have always been a Manchester United fan, so to be playing in the first team really is a dream come true. I am grateful for having the chance to prove myself. To be able to play football at the biggest club in the world means everything to me and my family."