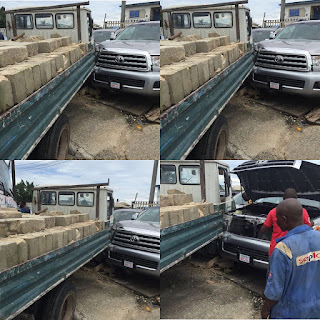 This was shared by an IG user.She wrote.....

'According to an eyewitness, the truck driver was trying to avoid an oncoming truck at Refinery road, Warri, Delta State, but he ended up running into a car stand with brand new cars on display. The furious car dealer is allegedly threatening to kill the truck driver because someone had already made part payment for one of the damaged vehicles, before the incident.'