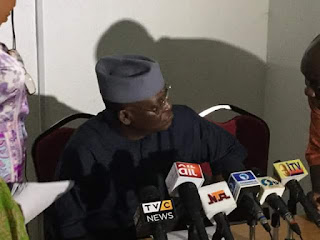 LET'S SET THE RECORD STRAIGHT BEING THE CONTENT OF PRESS CONFERENCE BY PRINCE ADEDAYO ADEYEYE MEMBER OF THE PDP NATIONAL CARETAKER COMMITTEE ON 29TH JULY, 2016
Ladies and Gentlemen of the press:
As you are aware yesterday 28th day of July, 2016, the case filed by Sen. Ali Modu Sheriff and 8 other Plaintiffs against the Peoples Democratic Party and the Independent National Electoral Commission i.e. Suit No: FHC/ABJ/CS/464/2016 came up before Hon. Justice Okon Abang of the Federal High Court, Abuja Division.
The Plaintiffs filed an application to stop the National Convention slated for 17th August, 2016 at Port Harcourt, Rivers State.
When this matter came for hearing yesterday 28th July, 2016, Learned Senior Counsel Ferdinand Orbih, SAN who was briefed to represent the 2nd defendant, the Peoples Democratic Party announced appearance for the said 2nd Defendant PDP.
O.O. Fakunle, SAN also announced appearance for the PDP claiming to have been briefed by one Barr. Bashir Maidugu who is the 5th Plaintiff in the matter.
In addition, members of the National Caretaker Committee applied to be joined as Parties to the case.  The application for joinder was filed by Yunus Ustaz Usman, SAN and Mr. Raji Ahmed, SAN.
That was the only application that was argued yesterday 28th July, 2016, and adjourned to 15th August, 2016 for ruling.


Now on the widely reported "ORDERS" purported to have been made by Hon. Justice Okon Abang, it is important to note the following:
a. The motion seeking to restrain the PDP from conducting the proposed 17th August, 2016 National Convention has not been heard by the Court and no date has been fixed for the hearing of same.
b. What was before the Court yesterday was the issue of who is the authentic legal Counsel for the PDP as between Ferdinand Orbih, SAN and O.O. Fakunle, SAN.
The Court in determining the question of Legal representation held that the appointment of O.O. Fakunle, SAN by Sen. Ali Modu Sheriff was acceptable to the Court.
It must be emphasized that at no stage did the Hon. Judge set aside the judgment of Justice A.M. Liman of the Port Harcourt Division of the Federal High Court, which could have led to the dissolution of the National Caretaker Committee.
An Order validating Sheriff as National Chairman could not have arisen from the issue of proper legal representation.
For the avoidance of doubt, the portion of the ruling relating to this is herein- under reproduced:
"Though I have powers to nullify the decision of the Port Harcourt Division that recognized Makarfi Leadership, I will not do so because there is no application to that effect before me.  I will, however allow the Court of Appeal to do justice to that"
This is necessary because proceedings of Courts of Law should not be subject of subjective manipulation.  We are a law abiding Committee and will always continue to operate within the ambit of the law.
It is not possible in Law that a Judge of a Court of record will acknowledge the existence of a valid judgment and proceed to make the kind of Orders purportedly attributed to him.
Ladies and Gentlemen; it should be very clear to you now that the ruling of yesterday did not at any point hand over the Leadership of PDP to Sen. Ali Modu sheriff, it did not declare the Sen. Makarfi led Caretaker Committee illegal and did not stop the proposed 17th August, 2016 National Convention.
Loading...
">