 Home   SPORTS  Fayose On OrangeFM: I've never met Dasuki, all petitions against Fayemi and APC, nobody is acting upon.Once you are in APC, you become an automatic saint(Photos)

Fayose On OrangeFM: I've never met Dasuki, all petitions against Fayemi and APC, nobody is acting upon.Once you are in APC, you become an automatic saint(Photos) 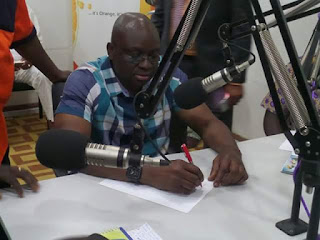 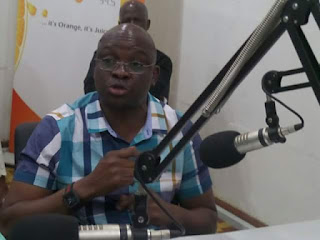 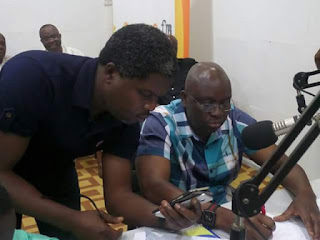 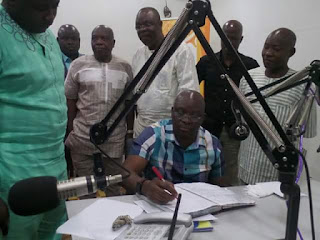 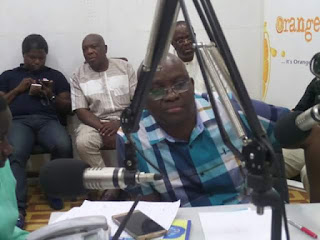 Fayose was a guest at OrangeFM today.While speaking,he said so many things like he has never met Dasuki, nobody is acting on all the petitions against Fayemi and APC,you are an automatic saint if you are an APC member,God sent me for a time like this and more.Below are the extracts from what he said today.....
'God sent me specially for a time like this'.
'I am the first governor to dualise roads in  Ekiti'.
'When APC tells you a thing,  think twice over it before accepting it'.
'Kerosene today is #220 under Buhari, when Jonathan was there,  the people bought it for #80'.
'I left #10.4b when I was leaving office in 2006, I don't know of a project that Olurin left in Ekiti'.
'If I brought myself here, I  will be removed,  if God brought me here through the people, I will remain unshakable'.
'My monthly Stomach Infrastructure program is a palliative, it is continuous'.
'The Southern Nigeria does not enjoy any measure of irrigation'.
'The federal government should declare emergency of Agricultural Sector'.
'I have created land banks for my people to farm, the federal government should help us in terms of mechanization'.
'We need tractors, plowers'.
'State governments must be prevented from borrowing monies beyond their tenure'.
'I want to say it again, governors should be prevented from borrowing beyond their tenure'.
'I stand by my decision on ban on activities of the herdsmen in Ekiti'.
I did not say Buhari should die, I don't have the power to kill. Whatever I say, I always stand by it'.
'I ve never met Dasuki, all petitions against Fayemi and APC, nobody is acting upon. Once you are in APC, you become an automatic saint'.
'The poor will be the one to suffer the actions of President Buhari'.
'Most of my predictions have come to pass'.
'Nepotism is the order of the day. This is unacceptable,  we must continue to speak against it'.
'I was 24 years when Buhari became military head of state, we queued then before we could purchase essential commodities,  this is the same way things were difficult'.
'Change has become Chance'.
'Nigeria needs a leader, not a ruler'.
#FayoseOnOrangeFM: I am their headache, I will continue to speak against their maladministration.
'APC is not an Option in Ondo State'.
'Nobody is perfect, if you vote APC in Ondo State, what we are experiencing in the central is same you will experience'.
'What has APC done to better the life of Nigerians since they took over'.
'Presently, Governor Mimiko is our leader, I have nothing against him'.


'By virtue of his position as the Chairman, PDP Govs Forum, Mimiko is my leader'.
'The fuel price hike under APC is unprecedented, everyone is finding things difficult, times are simply too hard under APC'.
'I am the voice of the poor masses, I won't stop speaking for them'.
'The Ekiti airport project had a setback from the court'.
'The deputy is the governor whenever the governor is not available, Ekiti is adequately represented at FEC'.
'I have written to Mr. President on some occasions, if he does not reply, what do I do?'
'I am not attacking Buhari, I am only telling him the Truth'.
'I have #300m in my Zenith Bank fixed deposit account, if they have anything to the contrary, let it be published along side Dasuki's statement'.
'A lot of the people who ran PDP in those 16 years are now in APC'.
'Jonathan left $28.6 in the federation account'
'GEJ left an enduring electoral legacy'.
Loading...
">