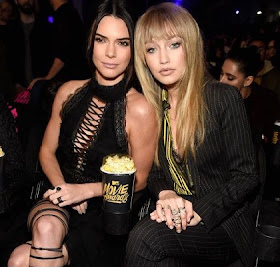 Super model, Kendall Jenner is grateful to her fans for her Teen Choice Awards. Kendall, who doubles as a reality star was up against two of her best friends, Gigi Hadid and Hailey Baldwin for the category of Choice Female Hottie of 2016.

However, Kendall Jenner defeated her friends in the fashion industry and picked the awards. She also won the Teen Choice Model of the Year.

She subsequently took to social media to celebrate her achievement and thank her fans, who she said made it possible.  thank you all for the 2 Teen Choice Awards tonight!! feeling the love your support means the world!