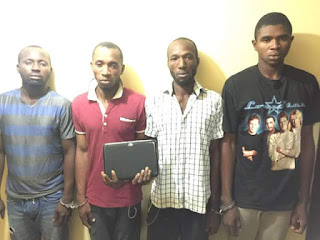 DON'T THINK NIGERIA IS LAWLESS - IGP WARNS
·As Police arrest a notorious kidnapping gang in Rivers State.
The Inspector-General of Police, Ag.IGP Ibrahim K. Idris, NPM, mni has warned criminals, especially kidnappers in the country never to think Nigeria is lawless. IGP Idris gave the warning when Operatives of the IGP's Intelligent Response Team "IRT" arrested a notorious kidnapping gang known to have been terrorizing law-abiding citizens in Rivers State and its environs.
The gang met its end when they kidnapped a woman and her one year old daughter from her Port Harcourt home, demanding the sum of two million, five hundred thousand naira as ransom for their freedom. Based on credible technical intelligence generated by the IRT, this was however agreed as bait.
But the end of the kidnapping gang came when in their attempt to claim the said sum of money at the agreed point; Operatives of IRT engaged them, rescued the victims and arrested four of the kidnappers who gave their names as: Herbert Oriminagbe, Chijioke Akah, alias Kottos, Kelechi Nwaordu, alias Seedof and Nelson Ajumogobia alias Ibios.


In their confessional statements, the gang admitted that they were also responsible for the kidnap of one Undunobuk and other innocent Nigerians. Going through a laptop computer recovered from them, it was discovered that the real owner Undunobuk was once robbed in his Port Harcourt residence and later kidnapped to unknown seaside only to be released on the payment of one million, three hundred thousand naira ransom.
The Inspector-General of Police, IGP Ibrahim Idris said the Nigeria Police Force has the technical and intelligence capacity and capability to reduce the perceived rise in crime, especially kidnapping, armed robbery, cultism and other forms of violent crime. He therefore charged Nigerians to always inform the Police when they perceived any act of criminality and avail necessary credible information.
DCP DON AWUNAH, fsi
FORCE PUBLIC RELATIONS OFFICER,
FORCE HEADQUARTERS,ABUJA.
Loading...
">