Akwa Ibom State Governor Mr Udom Emmanuel has shaded light on the delay in the  construction of Aba, Ikot Ekpene Road saying that the Federal Government has not consented to his request for concessioning of the highway but has captured in the budget and earmark it for construction in the coming year.

Governor Emmanuel stated this when he addressed a cross section of Ikot Ekpene and Essien Udim people at Christ The King Parish, Odoro Ikot in Essien Udim Local Government Area during the Silver Jubilee celebration of the Church.

According to him "I have applied to the Federal Government to hand over the road traversing Aba, Ikot Ekpene and Calabar to enable me partner a Private investor who will repair the road and errect toll gate to recover the investment. Instead of granting the application the Federal Government announced that the road has been captured in next year's budget and has been earmarked for construction so I am calling for understanding as the road would soon be repaired as promised by the Central Government "

Governor Emmanuel also decried the incessant communal clashes arising from disputed land leading to loss of lives and properties in Ikot Ineme community and said that government has taken possession  of the disputed land for agricultural purpose.

He cautioned the people against blood shed stressing that his administration would continue to ensure the protection of lives of it citizens and would not condone lawlessness and charged Community Stakeholders to report crisis situations for prompt intervention.

The Governor called on the church to rise to the challenge of addressing moral decadence in the society by preaching word of salvation, morality as well as reinvent evangelism to direct the minds of the people towards the fear of God.

"the church has compromised its calling to indulge more in social activities than evangelism. The spate of immorality witnessed in the society today is because the church has backslided in it role as a change agent." The Governor remarked.

He donated a bus to the church to aid in the evangelism.and pledged a five million naira donation in support of the silver jubilee project.

In an homily, the Catholic Bishop of Ikot Ekpene Most Rev. Camilus Raymond Umoh charged Christians to be prepared at all times for the call of God by living in peace with one another.

The cleric condemned the perpetration of barbaric acts in the community due to land dispute and blamed the political class for not always rising to keep the peace by drawing the apparatus of government to stem conflict. 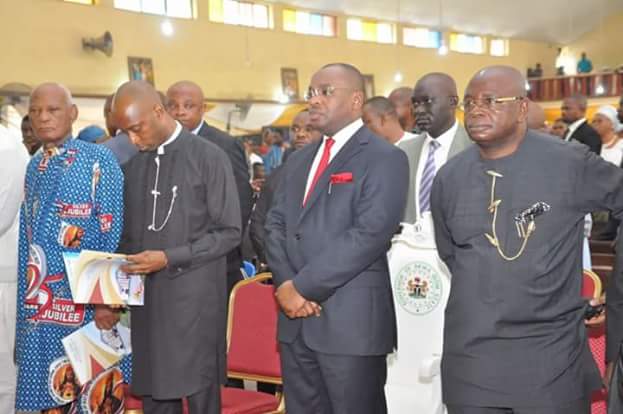 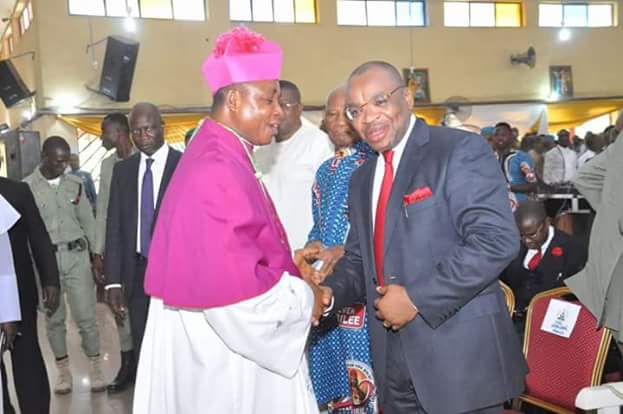