 Home   POLITICS  Gov. Okorocha is Setting Traps for Imolites. We Believe That They Deserve the Best: PDP

Gov. Okorocha is Setting Traps for Imolites. We Believe That They Deserve the Best: PDP

Gov. Okorocha is Setting Traps for Imolites. We Believe That They Deserve the Best

The attention of our great party, the People's Democratic Party, Imo State, has been drawn to the numerous substandard projects scattered all over the state capital. We have also taken out time to embark on sight seeing of, and fact finding on these projects, and we have discovered that the state governor, Owelle Rochas Okorocha is just setting a dangerous trap for Imolites. This trap will no doubt spring in the nearest future.

As an opposition party, we encourage any development that is going on in Imo State once it will be of direct benefit to the masses. The act of executing substandard projects in Imo State is totally out of place and unfortunate. The PDP believes in standard and quality projects. There is no gainsaying that that is the reason why the only pliable, memorable roads we have in Imo today are those done by the past PDP administrations.

We urge the governor, Gov. Rochas Okorocha to utilize Imo State funds for the benefit of Imolites. The governor should understand that he is only doing his primary assignment and not doing Imolites any favour. We demand that only established, known and identifiable construction companies should be used to work for Imolites. We cannot continue to use manual, unskilled labour to work on important roads in the state capital. This remains the reason why Imo state roads under Governor Okorocha does not survive one rainy season.

This has once again confirmed that the PDP remains the only party that can give Imolites quality projects. We urge the people to remain steadfast with us, assuring them that we shall not fail. 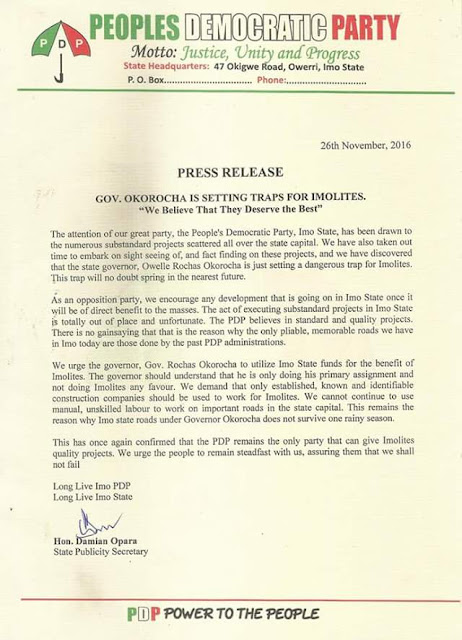