Trezzy Helm November 28, 2016 NEWS
Loading...
Northern Governors, General Electric sign MOU for 5 power plants
The Northern States Governors' Forum and the General Electric ‎International, on Monday signed a memoranda of understanding for the construction of five solar plants that aim at generating 500 megawatts of electricity in some parts of Northern Nigeria.


Borno State Governor and Chairman of the Northern States Governors ' Forum, Kashim Shettima signed the agreement on behalf of the ‎Governors while General Electric's Senior Executive, Western Europe and Africa, Mr Armand Pineda and the President/Chief Executive Officer, ‎General Electric, Nigeria, Dr Lazarus Angbazo signed on behalf of their company in a brief ceremony which held at Transcorp Hilton Hotel in Abuja.


Based on the MOU, the General Electric which has 120 years experience in power generation, is to build five solar power plants to be located in Borno, Kebbi, Nassarawa, Niger and Taraba States which each of the plants expected to generate 100 megawatts of electricity totaling 500 megawatts across the 5 States. The electricity is meant to stimulate economic activities and social services in the affected States through boosting agricultural food processing, small scale businesses in addition to supplying electricity to schools and hospitals.


The project which is a pilot phase, is being coordinated by the Northern Nigeria Global Economic Re-integrationProgramme, newly created by the Northern Governors to serve as vehicle for the economic recovery of northern States through international relations on infrastructure, manufacturing, stimulate agricultural value chain and trade and make the region a global payer agricultural  export in line with the vision of late Premier of the Region.
The Governors Forum led by Governor Kashim Shettima, engaged the services of Malam Tanimu Yakubu Kurfi as Cheif Executive Officer of the Programme. Kurfi was Chief Economic Adviser to late President Umaru Musa Yar'adua and he has wide contact with leading development companies and financial institutions across the world.
"The 19 Governors of the north jointly created this approach. We want to go beyond lamentation to provide solutions and we all know that power is key to industrial development. With power, we can create jobs, stimulate our economies and make life better for our people. The General Electric has over 120 years experience in energy solutions and they have been operating in Nigeria for over 50 years, we cannot have a better partner than GE. We shall do our part as Governors, this I will assure you. We are deeply committed to this agreement" Governor Kashim Shettima said at the MOU signing ceremony.
The Northern Governors Chairman enumerated challenges of poverty, unemployment, poor access to education, poor healthcare amongst other underdevelopment indications threatening the north while concluding that the power can provide a vehicle for the north to reposition itself for a better future.
The CEO, Northern Nigeria Global Economic Re-Integration Programme, Tanimu Yakubu Kurfi said he took up the challenge ‎put forward by the Northern Governors as a result of strong passion and commitment to aggressive development of the north as so far shown by the Northern Governors since Governor Shettima became the forum's chairman in 2015.


Reaffirming their commitment to the MOU, General Electric's Senior Executive, Western Europe and Africa, Mr Armand Pineda and the President/Chief Executive Officer, ‎General Electric, Nigeria, Dr Lazarus Angbazo both pledged that they would work round the clock to realize the project for the benefits of citizens of the five States. 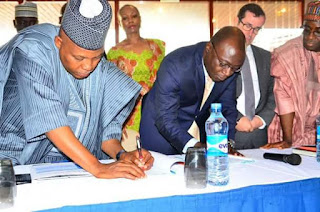 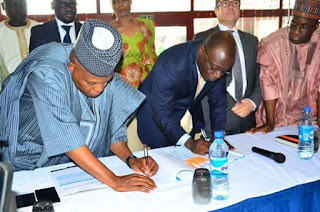 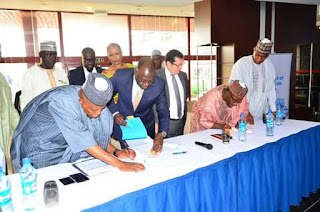 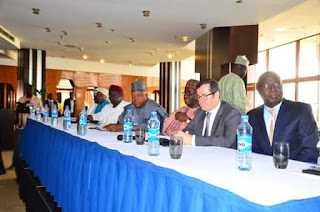 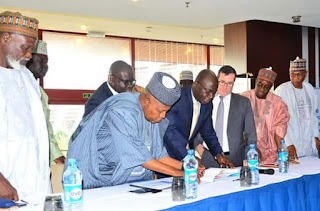 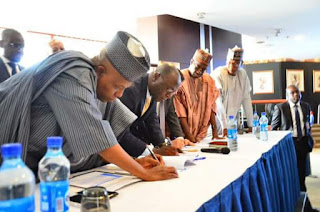 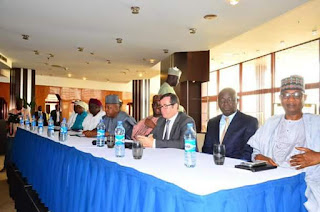