Loading...
According to Bola,pictured below is the Mercedes-Benz Ekiti State Governor, Mr. Ayodele Fayose rode to the Olukayode stadium during his swearing in on October 16th 2014.One of his critics claimed named Wale Ojo Lanre, former CPS to Asiwaju Segun Oni claimed Fayose bought the car with N60m public fund.


However,Bola told him that the N60m allegation was a lie taken too far until Ayodele Suyi made nonsense of his brother's post and asked him how Fayose could have bought a 1964 Benz for N64m with Ekiti fund even before he was sworn in as governor. 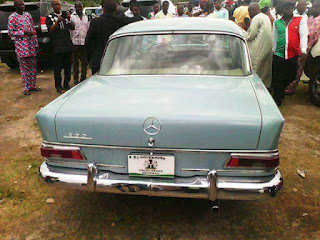 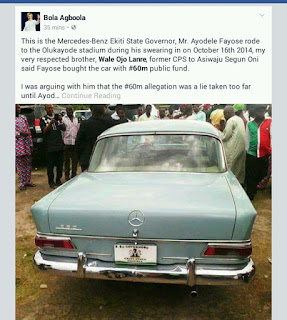