Shame As Two Kenyan Politicians Fight In Public During Rally(photos)

Two Kenyan politicians fought in public at an opposition Orange Democratic Movement (ODM) rally. One of the politicians is a serving member of parliament, the other is an aspirant planning to challenge him in the elections expected to be held in August next year.

Homa Bay MP Opondo Kaluma was pictured wrestleing aspiring candidate Washington Ogaga (in kitenge) after they disagreed during a political rally in Homa Bay town on 27th November, 2016. The two who had earlier attended a memorial service at the late Otieno Kajwang's home in Mbita, where Governor Cyprian Awiti's car was allegedly pelted with stones, came face to face and square it out physically to the surprise of other Nyanza leaders.

Homa Bay Town MP Opondo Kaluma and his opponent Washington Ogaga may be disqualified from participating in ODM party primaries ahead of 2017 general election for fighting in public.

ODM national Chairman John Mbadi has announced that the party has launched investigations into the alleged misconduct by the duo, which saw them resort to a fist fight during a campaign rally in Homa Bay on Sunday.

See one photos after the cut… 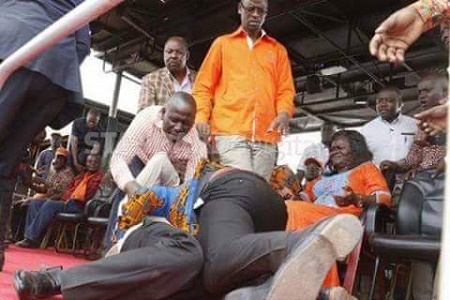 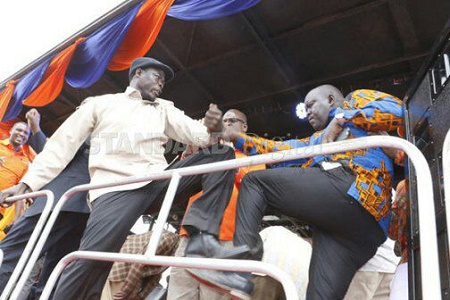