Chelsea star Victor Moses has won the PFA Fans' Premier League Player of the Month award for November, beating the likes of Sergio Aguero and Gylfi Sigurdsson.
More than 40,000 votes were cast in the poll, which was held on the Sky Sports website and apps, with Moses claiming a landslide victory with 18,756 votes.
Swansea's Sigurdsson came second with 7,791 votes, while Watford's Nordin Amrabat was third with 5,378 votes. Rounding off the top six were Sunderland's Victor Anichebe (3,642), Manchester City's Aguero (3,457) and West Brom's Matt Phillips (1,203).
The six candidates were chosen by our expert panel, which included Sky Sports pundits Peter Beagrie and Paul Merson, Mike Riley - general manager of the Professional Game Match Officials, and Malcolm Clarke - chairman of the Football Supporters' Federation.
And it is Moses, whose performances in November have helped Chelsea to the top of the Premier League, who has come out on top thanks to your votes, which have been verified by an independent party. 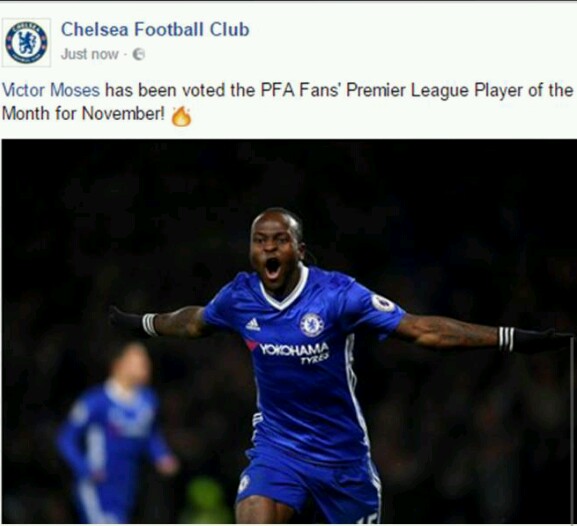