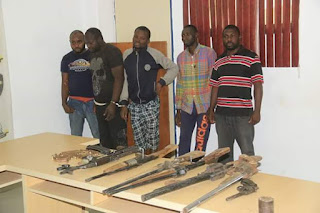 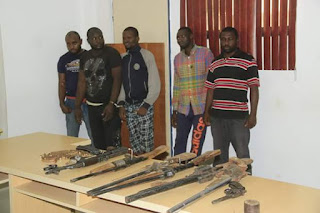 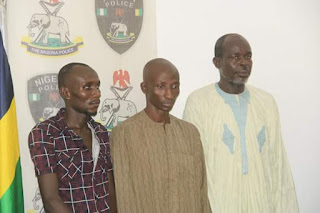 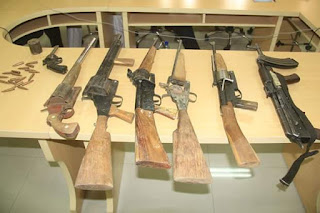 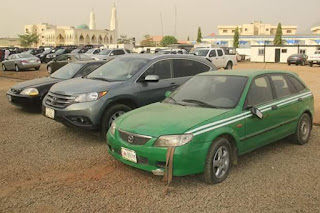 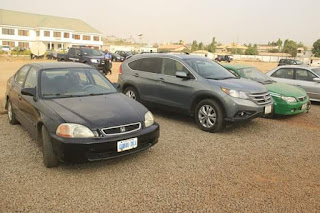 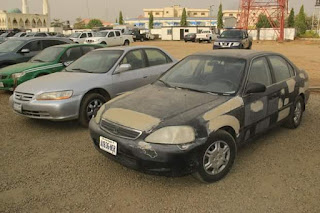 PARADE OF KIDNAP FOR RANSOM  AND OTHER VIOLENT CRIMES SUSPECTS

Gentlemen of the Press, you are welcome to today's press briefing. The Inspector General of Police, IGP Ibrahim K. Idris NPM, mni, concerned with crime of kidnappings and other related violent crimes in the country, reorganized and equipped the IGP's Special Tactical Squad (STS) and Technical Intelligence Unit, (TIU) and other investigative departments of the Force for optimum performance to nip in the bud and rid the country of the menace.

2.Against this background, the Special Tactical Squad STS with the assistance of Technical Intelligence Unit TIU/ATIC recorded remarkable achievements in tackling these crimes across the Country.

CASE  I:ARREST OF VICIOUS KIDNAPPERS, RECOVERY OF ARMS AND AMMUNITION, VICTIMS CAR AND OPERATIONAL VEHICLE OF THE KIDNAPPERS

i.   Operational vehicle of the gang (Abuja color Mazda) with reg No. SNK 891 TM.

In a renewed onslaughts against kidnappers across the country, the operatives of the IGP's Special Tactical Squad working on actionable intelligence, with the assistance of Technical Intelligence Unit TIU/ATIC, smashed a vicious kidnap for ransom gang and arrested three (3) kidnappers on 12/2/2017 at their hideout in Abuja and Kano respectively.  The suspects confessed to the crime and admitted to have collected one million naira ransom money before releasing the victims. Investigation is being intensified to arrest the other fleeing members of the syndicate.

On the 18/02/2017, a reliable intelligence received on the activities of syndicate specialized in receiving stolen vehicles and the undercover operatives of IGP Special Tactical Squad (STS) trailed and arrested the above mentioned suspect. He confessed to have specialized in receiving stolen cars while the above listed exhibits were recovered from him. Suspect will be charged to court on completion of investigation.

The IGP's Special Tactical Squad working on actionable intelligence trailed and arrested the suspect on 22/2/2017 at Buggai Village in Chukun LGA Kaduna State. The suspect confessed to the crime and mentioned one Nelson Paul who had earlier been paraded as his supplier. The suspect will be charged to court on completion of investigation.

In a determination to tackle car snatching cases, on 28/01/2017, Operatives of the IGP's Special Tactical Squad (STS) trailed and arrested a criminal syndicate that specialized in car snatching in Bauchi state and environs. During interrogation, suspects confessed to be members of a car snatch syndicate that specialized in drugging soft drinks for drivers and in the process snatch their vehicles. Investigation is being intensified to arrest the remaining gang members. Suspects will be arraigned in court on completion of investigation.

Thank you for your attention and God bless