Osun Government Release Statement On The Death Of Senator Adeleke

We are still in shock and great pain over the transition of our friend, associate and brother, Senator Isiaka Adetunji Adeleke.  He was a prominent son of our state and its first democratically elected Governor. Until his death, he was the senator representing Osun West in the Senate of the Federal Republic of Nigeria. He was an astute and colourful politician and a generous personality. He was gregarious, enthusiastic and full of life and zest. His death is therefore shocking and totally unexpected.
The State Government of Osun had intended to give him a befitting state burial which he rightly deserved and which the state had prepared to undertake.
Regrettably, however, the enemies of the state, through brigandage, violence and evil machinations, created an atmosphere of fear and terror in the minds of our citizenry and friends throughout the federation. Immediately the news of his demise filtered in, a band of vagabonds, crying more than the bereaved, took to the streets, looting and wreaking havoc. Journalists were roughened and their equipment damaged. Important dignitaries that came for the burial were equally molested by these thugs.
Senator Adeleke was a man of peace. He preached peace and lived it through his life. He left the Peoples Democratic Party (PDP) because he could not stand violence. This was after he was beaten up by some leaders of the PDP during a meeting in a hotel in Osogbo.
It is a profound irony and most unfortunate therefore that a few disgruntled elements purporting to protest his death desecrated his funeral with violence and attacks on innocent persons. They dishonoured him and did his memory a great disservice by keeping his friends, political associates and well-wishers away from his burial.
The best we could do in the circumstance was to declare three days of mourning throughout the state and fly national, state and our party’s flags at half-mast in his honour.
In the light of this, the State Government of Osun, using the instrumentality of the law, is setting up an inquest to unravel the circumstances of this unfortunate and sad incident, in order to put the record straight on his death.
We continue to mourn the untimely death of Senator Isiaka Adetunji Adeleke. He is irreplaceable in our hearts.  We commiserate with his family, the good people of Ede, associates, friends, constituents and generality of our people on the passage of this patriot. As we pray for the repose of his soul, we equally pray for the strength to bear this heavy loss. 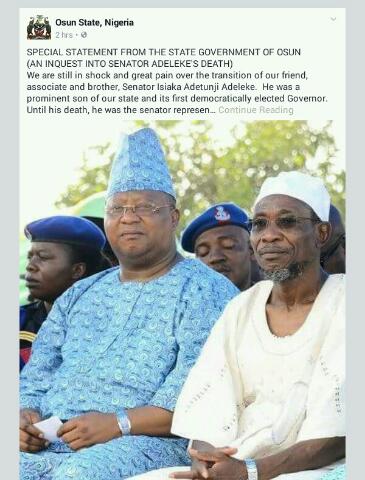 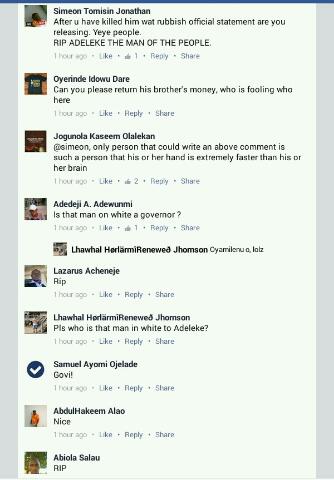 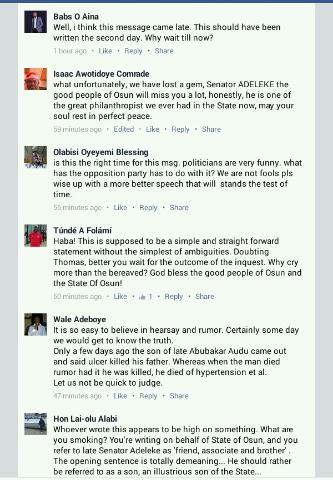