Governors in the south-eastern part of Nigeria are reportedly meeting the leader of the Indigenous People of Biafra (IPOB), Nnamdi Kanu in Enugu.

We learnt that the meeting, which is holding inside the Enugu Government House, also has His Royal Highness, Eze Israel Okwu Kanu, the father of the IPOB leader, in attendance.

The Sun listed the government at the meeting to include: Ifeanyi Ugwuanyi, who is the host. Others include Dave Umahi of Ebonyi; the deputy governor of Anambra state and Dr Nkem Okeke. It was learnt that Governors Rochas Okorocha of Imo and Dr Okezie Ikpeazu of Abia were being awaited.

Details of the meeting were sketchy at the time of this report, but Emmanuel Uzor, the chief press secretary to Governor Umahi confirmed it adding that one of the major issues for discussion is the call by IPOB for residents to boycott the forthcoming Anambra election.

The election holds on November 18. 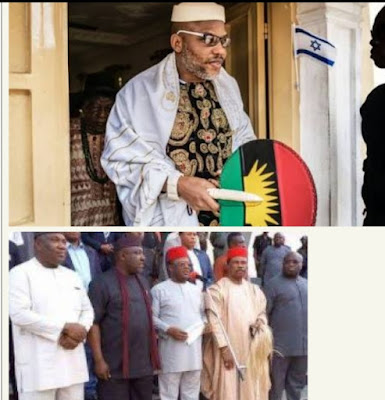