Slyvanus Akintope Paul Tiwo, leader of the Celestial Church of Christ worldwide, urged the youths to work with hope in God

- He predicted that Nnamdi Kanu, the leader of IPOB, would soon be deserted by his followers

-A leader of the Celestial Church of Christ (CCC) worldwide, Pastor Slyvanus Akintope Paul Tiwo, has revealed a prophecy concerning the agitation of Nnamdi Kanu, leader of the Indigenous People of Biafra (IPOB).

Pastor Tiwo said Kanu will lose many followers in the coming days as he would be deserted by the people. Apart from this, Tiwo revealed that the members of Boko Haram are currently ‘living on borrowed time’ adding that the Holy Spirit had told him that they will soon be crushed totally. Daily Times reports the prophet as saying:

“They want an Islamic state where they will apply Sharia law but the Lord said that Boko Haram will cease to exist.

“The Lord said that what they will do next is go into into kidnapping for ransom. And it is beginning to happen.

“As for the Biafra agitation, it was when they started that the Lord spoke to me that these people who are from the south-east, who are our brothers, who are our people and fellow Nigerians, will soon go into arm insurrection. That they will adopt the hit and run tactics and it is already happening in Anambra state.

“Did you not see what happened last week in Anambra? Though, it will get a bit worse, the agitation will soon fizzle out.

He further declared that Nigeria would soon become the envy of the world because of God’s blessings. He admonished the youths in the country to work with hope in God so as to make the country great the way God has destined it.

“Let Nigerians stop working against the nation and its leaders,” he pleaded just as he further called the quit notice from Arewa youths to Igbo peoples as mere threat. He said there are no need to panic concerning the current agitations across the country.

It was earlier reported how the leader of the Coalition of Niger Delta Agitators, John Duku, told Igbo people not to trust Nnamdi Kanu to help them achieve Biafra. Duku said this while re-emphasising the October 1 quit notice his group issued to Hausa and Yoruba people in the Niger Delta. 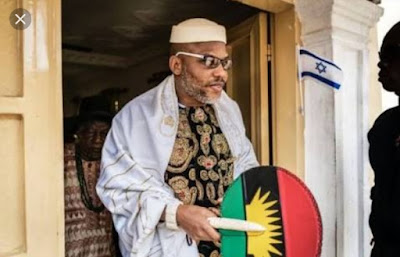