 Home   NEWS  President Buhari's Spokesperson Femi Adesina:There Was Blood Shed And Igbos Were Killed In Thousands In The North Because Federal Government Did Not Obey Aburi Accord Agreement

President Buhari's Spokesperson Femi Adesina:There Was Blood Shed And Igbos Were Killed In Thousands In The North Because Federal Government Did Not Obey Aburi Accord Agreement

This article was written by Femi Adesina the current Spokesperson to President Buhari in 2016 after the demise of Ikemba Odumegwu Ojukwu.

THE ABURI ACCORD THAT WOULD HAVE SAVED NIGERIA FROM ALL HER PROBLEMS...( but aborted by the Fulani Oligarchy)

By FEMI ADESINA( current spokesperson to President Buhari)
In December 2009, I was at Aburi, while holidaying in Ghana. We Nigerians call it A-b-u-r-i, but the Ghanaians pronounce it as E-b-r-i. For those who have read widely about the civil war that we fought between 1967 and 1970,

Aburi is a significant place. This was what I wrote about Aburi, after returning from that journey:

“Aburi. Beautiful, serene Aburi, set daintily atop a hill. It is home to a botanical garden that is 119 years old. But for us in Nigeria, Aburi goes beyond just nature and its preservation.

It is the town where General Yakubu Gowon and Odumegwu Ojukwu met, to try and avert the Nigerian Civil War that lasted between 1967 and 1970. They came out with Aburi Accord, which later broke down. And a shooting war started.

You could see the Presidential Lodge on a hill, where the Nigerian leaders had parleyed at the behest of Ghanaian leaders. It all ended in futility.”

As one of the key parties to the Aburi Accord, Dim Chukwuemeka Odumegwu Ojukwu, returns to mother earth today, it is also apposite to return to Aburi, and look at the letter and the spirit of the accord once again, an agreement that was violated by the Federal side, and which made a bloody internecine war inevitable.
For most part of 1966, the northern part of Nigeria, particularly, had been turned to killing fields.

Non-natives, especially Igbos, were killed in thousands. Many fled, many others were displaced. There was complete anarchy in the land. The average Igbo looked up to Lt. Col Odumegwu Ojukwu, military governor of the Eastern Region, to provide leadership and direction. He did not fail. He picked the gauntlet and championed the cause of his people.

By January 1967, the drums of war were loud and clear, reverberating across the length and breadth of Nigeria. But there was a last ditch effort to prevent what was imminent. There was a peace meeting hosted at Aburi, in Ghana, by the then Ghanaian head of state, Gen J. A. Ankrah.

At the meeting were Gowon, Ojukwu, all the military governors of the regions, and some top civil servants, both from the Federal side and the Eastern region. The meeting held on January 4 and 5, 1967, and came out with what is popularly known today as the Aburi Accord.

The agenda of the meeting consisted of three crucial issues: (i) Reorganization of the Armed Forces (ii) Constitutional agreement (iii) Issues of displaced persons within Nigeria.

The two-day meeting reached consensus that were acceptable to both sides. Among others, it was resolved that legislative and executive authority of the Federal Military Government was to remain in the Supreme Military Council (SMC), to which any decision affecting the whole country shall be referred for determination provided it is possible for a meeting to be held, and the matter requiring determination must be referred to military governors for their comment and concurrence. What does this mean in simple language?

The SMC would run the affairs of the country, but not without consulting the regions as represented by the military governors. This was something akin to federalism, even under a military government.

Other terms of the agreement include that appointments to senior ranks in the police, diplomatic and consular services as well as appointment to superscale posts in the federal civil service and the equivalent posts in the statutory corporations must be approved by the SMC. What does this mean again in simple language? Equity, fairness, true federalism.

Other matters like the holding of an ad hoc constitutional conference, fate of soldiers involved in the January 15, 1966 coup, rehabilitation of displaced persons, etc, were also amicably resolved, and the conferees returned happily to Nigeria. Only for the Federal side to deliver a blow to the solar plexus: the Aburi Accord, Gowon said, was unworkable, and he reneged on all the agreements.

Using the Eastern Nigerian Broadcasting Service, Ojukwu played the tape recording of the proceedings at Aburi repeatedly, to educate the populace on who was playing Judas. Later, he made a broadcast in which he said: “we in the East are anxious to see that our differences are resolved by peaceful means and that Nigeria is preserved as a unit, but it is doubtful, and the world must judge whether Lt. Col Gowon’s attitudes and other exhibitions of his insincerity are something which can lead to a return of normalcy and confidence in the country.

In a piece I did last December, shortly after Ojukwu passed away, I said he was virtually pushed into war by the infidelity of the Federal side to the Aburi Accord. I still stand by that position. Ojukwu was called ‘warlord’ for many decades, but he was by no means a warmonger. He only did what he needed to do for his people–and for the country.

As his earthly remains are interred today, it is tragic that Nigeria is still submerged in the morass that Ojukwu already identified about 45 years ago. Today, bombs go off like firecrackers in the country. There is agitation for the review of the revenue allocation formula.

There are strident calls for the convocation of a sovereign national conference. Even some component parts are threatening to pull out of the federation if anything happened to their ‘son’ who is now in power. Didn’t Ojukwu warn of these landmines ahead? Were all these issues not already settled at Aburi?

Foremost journalist and media administrator, Akogun Tola Adeniyi, in a recent media interview, explained the Aburi Accord this way: “Let every region be semi-autonomous and develop at its own level.” Yes, that was the spirit and letter of Aburi, but which sadly became a road not taken.

And is that not why we are still suffering today, living in a rickety and decrepit country that can burst at the seams any moment? I tell you, Ojukwu was a prophet, and like most prophets, he had no honour in his own country. Pity. But whether we like it or not, there’s no way we won’t return to Aburi. Willy-nilly. I only hope it will be sooner than later, before Nigeria goes to grief. On Aburi I stand.

Federal Government was perfidious and duplicitous on Aburi. It is still the same way today. That is why as Nigerians, we are most times disillusioned, dismayed, dispirited, dejected and depressed. When will change come to this land? Our hearts are getting weary.

Last December, I wrote that Ojukwu should be buried like a hero. I’m glad at the rites of passage so far, culminating in the interment today. Yes, bury him like a true hero. An icon, an avatar, deserves no less. This generation will surely not see another like Ojukwu. He fought not only for his own people, but for a true federation founded on justice, fair play, equity and rectitude. Unfortunately, he did not see the Nigeria of his dreams. Will we? Adieu the Ikemba, the Eze Igbo Gburugburu. May your soul rest in peace. Ka nkpur’obi gi zue ike n’adukwa.

"THE QUESTION IS, CAN HE ( FEMI) STILL BOLDLY WRITE THE SAME ARTICLE NOW OR ADVICE HIS PRINCIPAL ON WHAT HE WROTE? 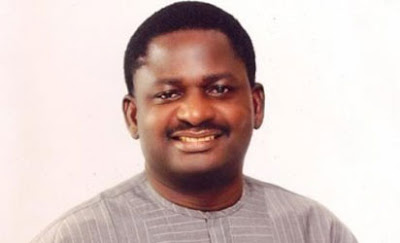 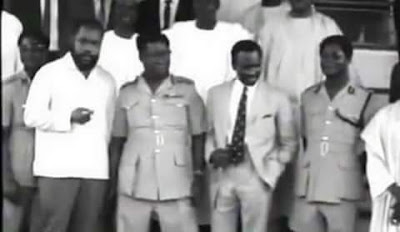