Quit Notice : We Are Leaving, Some Igbos In Bauchi Vow

Some Igbo residents in Bauchi State have reacted to the Coalition of Northern Groups (CNG)’s withdrawal of the quit notice handed down to the Igbo living in the North, insisting that they already had their minds made and would leave the region.

Speaking with Daily Sun in Bauchi, on Friday, they stressed that they are leaving before the October 1 quit notice issued to them saying that as far as they are concern the quit notice still stands.

One of them, IK Iloanya, a businessman, said Thursday’s stance by the northern youth did not appease him to stay back.

Iloanya, from Agwu Local Government Area of Anambra State, said: “As far as I am concern, the quit notice still stands. I still stand on the quit notice. I am ready to forfeit my house and other property to leave before October 1”

Another Igbo resident, Jerry Ikechukwu, a spare parts dealer at Bakin Kura, said he has conclude plans to leave Bauchi and return after a week when he is sure that there would be no trouble.

Ikechuwku, an indigene of Aniocha Local Government in Anambra State, said but for prominent northern leaders like the Sultan of Sokoto

Sa’ad Abubakar and the Emir of Bauchi, Dr Rilwanu Adamu. who personally came out to say that nothing would happen to Igbos, he would have left as soon as the notice was issued.

“I expected President Buhari to say something about the issue in his recent speech but did not but I am leaving and may return when I am sure the coast is clear,” Ikechuwku said.

Our correspondent discovered that a lot of Igbos residents had either sold or lease their properties, including Hotels, houses and business premises.

“Almost all the Igbo people in my yard are going,” said Olu, a Bauchi resident.

But others like Vera Udeh, and Chika Onwuka, said they are not leaving Bauchi.

“I thank them for not asking us to leave again. As for me and my family, we are staying. When it is time to go, we will go because nobody forced me to come to Bauchi,” Onwuka said.

Henry Nduagube, a spare parts dealer, said that there had been tremendous pressure from his kinsmen in Ezeagu local government of

Enugu State, for him to leave the north before the October 1 dealine “Thank God for the new development. I was confident that nothing will happen to us (Igbos). I have made up my mind that I will not leave the north. I am not going anywhere,” said Nduagube, who has lived in Bauchi for over 16 years.

Another resident, Vincent Okonkwo, from Nnewi , said he didn’t see any reason why Nigeria should break up.

“I have been in Bauchi for 28 years. I don’t plan to go anywhere because I remain a Nigerian,” Okonkwo, said.

The Eze Igbo of Bauchi, Igwe Jude Umezika, expressed happiness with the northern youth for rescinding the October 1 quiet notice.

Umezika particularly commended the Vice President Yemi Osibanjo, for the way he handled the situation, saying it calm frayed nerves.

“Any Igbo man thinking of going should drop the idea because the quit notice has been dropped,” he said.

Speaking with Saturday Sun, the Igwe appealed to religious and traditional rulers in the north to come together and sue for peace.

“I call on them now that the quit notice has been dropped, to go round and preach peace

He was optimistic that the role played by the Emir of Bauchi, Alhaji Dr Rilwanu Adamu and the Governor of the state Barrister Mohammed

The Igwe said: “I trust the Emir of Bauchi who raised his hands to heaven that as long as he is alive, his time would witness peace.

“We also thank Governor Abubakar because he is someone that if you are aggrieved, when he talks to you, you will feel better and change your mind about what you planned to do” 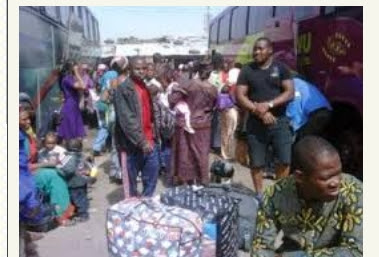