Chelsea midfielder Tiemoue Bakayoko nails his colours to the mast as France star dyes his hair blue after scoring his first Premier League goal for the club
*.Chelsea travel to the south coast to face Bournemouth on Saturday evening
*.Midfielder Tiemoue Bakayoko has been impressive since his move this summer*.The France international has dyed his hair blueahead of this weekend's clash
*.He vowed to dye his hair blue after scoring his first Premier League goal
He told the Sun he would dye his hair blue when he scored his first goal for the club, and he has been true to his word after he opened his Premier League account against Crystal Palace earlier this month. Antonio Conte's side have started the campaign only reasonably well, but Bakayoko has been one of the success stories this season. With a goal and a couple of assists to his name already, the France international has been a stand-out performer and his work-rate has actedas the perfect foil for the Blues' attacking stars. 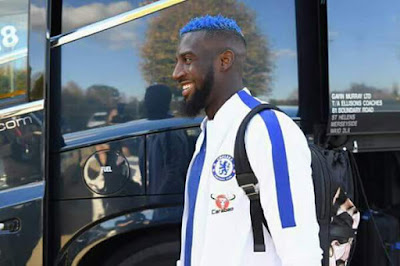