 Home   NEWS  "Biafra Is A Fraud – It Was In The Mortuary, Now Gone To The Cemetery" -Igbo Traditional Ruler

"Biafra Is A Fraud – It Was In The Mortuary, Now Gone To The Cemetery" -Igbo Traditional Ruler

Eze Nwabueze Soronnadi Ezewiro, a traditional ruler from Mbaise in Imo State, has distanced himself from the struggle for Biafra, describing the agitation as a fraud.

While in Calabar, yesterday, the monarch said:-

“I am His Imperial Majesty Eze Nwabueze Soronnadi Ezewiro from Mbaise in Imo State as well as the Lord Mayor of the Igbo Nation and in Diaspora, Eze Agaba-Idu 1 of Igbo kingdom.

Biafra is a fraud. Whichever way they take it but the truth has to be said anyway, the only institutional body that represents Igbo people all over the world is Ohaneze Ndigbo, not Biafra.

Let me ask you one thing, when Odumegwu Ojukwu died, he was a General, he was given a state burial during the time of Jonathan, you saw in Nnewi that day that we, the Ohaneze Ndigbo were making our own preparation but the Presidency was doing the burial.

His body was carried by Nigerian soldiers, so where are the Biafran soldiers to carry the body? “When they’re talking about Biafra, is Biafra only Imo, Abia, Anambra Enugu and Ebonyi states? No.

It should be South-South, South-East all incorporated because these are the old eastern region excluding Edo. Have you seen anybody from those South-South states supporting Biafra?

We will put this thing on the table, get the Presidency, put our heads together and discuss this thing. But you can’t get it by force as if you are inciting to segregate from Nigeria federation.

The Biafran thing as much as I am concerned is dead gone. It was in the mortuary, it has gone to the cemetery. Its dead, there’s nothing and there would not be anything like Biafra.” 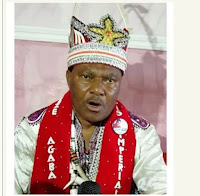