Iwo Stands Still For Oluwo, Stages Solidarity Rally In Support Of His Emirship

The people of Iwo trooped out to the street to stage a solidarity rally in support of Oluwo, Oba Abdul Rasheed Adewale Akanbi as the Emir of Yorubaland and Sheikh Yahkub Abdul Baaqi Muhammad, the first Wazeer of Yorubas.The rally was organised by Jama’at Ta’awunil Muslimen with the supports of all Muslims that made up 90% of the city's population. It took place immediately after the Jumat service with placards showing Iwo people are solidly behind their Emir.

Recently, Nigeria was engulfed with different speculations and false alarm that Oluwo was trying to cede his territory the way Ilorin was ceded to the North, which was debunked in the interview granted by the King himself and the statement released by his press secretary, Ali Ibroheem.

“The rally is to prove to the world that every step taken by the Oluwo has the backing of his people in the town. Iwo is rich in Islamic history and not only in Yorubaland alone but in Nigeria as well, the history tells; and Islam has been making a great contribution to Iwo development.

“It has helped in producing doctors in various fields, assist in establishing different Islamic foundations providing work for the people, water for different homes and promoting memorisation of Al-quran among the children and adults which in the next five years Iwo will add to its crown as the city of those who have memorised the whole Al-Quran. So what makes Iwo special among its brother’s town are numerous and also lucky to have a king who has passion for what his people want. So why won’t’ we support him?”

Oluwo thanked his people and reiterated his support for Islamic development.

“If we stand with Allah, we will surely be triumphed. In Iwo, Islam has been launched and there is nothing anyone can do about that. Call me Oba, Emir even Egwe, they are all my names. It unites us and brings us together as one Nigeria. I was coming from somewhere, very close to Iwo and the Hausa people there were just shouting Emir! Emir!I was amazed but it makes me happy. They see me as one of them. If Yoruba call me Oba and the Muslims call me their Emir, that alone promotes national unity and shows I belong to my people. So why won’t I thank my people for their support” Oluwo remarked.

He then prayed to Almighty Allah to make Iwo the Medina of Yorubas. 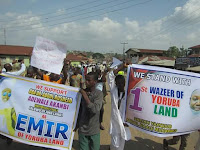 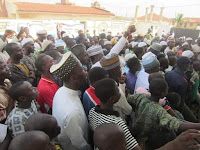 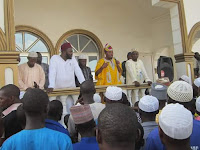