Bachama Militias murder Fulani man and his son in Adamawa(Photos)

Below are photos of the mutilated corpse of a Fulani traveler (Auwal Misa Abbare ) intercepted & brutally killed along side with his 3yr old biological son (remains in a bag)  by the murderous Bachama militias at Kpasham village along Jalingo- Numan road on 19,June,2018.

Mr Misa Abbare was on his way returning from Yola, capital city of Adamawa after a Sallah homage visit to his relatives.He was selectively forced out from the commercial vehicle with son and killed by the murderous Bachama militia's for being Fulani and Muslim.

Late Auwal Misa Abbare is from Abbare, a Fulani town  in Lau LGA of Taraba state, suburb of Jalingo the state capital city. 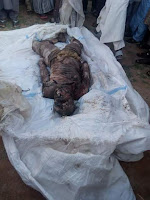 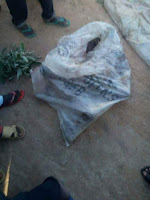