Muhammad Uba 42yrs, from Yobo state, a  discharged Corporal, Nigeria Army. Out of Frustration, he volunteering discharged from service after sustaining an injury which paralyzed him in Sudan during Peace Keeping Mission. He was denied monetary compensation paid by United Nations by the Army Authorities (Our lawyers already briefed.).

Muhammad Uba relocated to Asaba with his family and years later joined a Vigilantee group to secure Abraka Market, also a member My Body My Right Initiative.

"On 17th June, 2018, at about 6:00pm, I saw two men people dragging a lady, as a security officer,  i have to intervene. I stopped them from dragging the girl. As I was about leaving, one of them pushed me and I asked him why he had to push me. He said if I ask him again he will deal with me and nothing will happen.

One of them hold me in my trouser and started dragging me. I started hearing from people looking, officers what did he do, leave him alone.  I then recognize two officers who are Police officers attach to Operations Department Delta State Police Command. The four officers teamed up and started beating me, naked me and broke my right hand.

Some passerby gathered and pleaded they let me be. They left me. I quickly took my phone and called Delta State Police Commissioner Mohammed Mustafa on this number 08037672845 and complained to him. Few minutes later, DPO C Division called me with using this line 08068219900, shouting at me why I should call Commissioner of Police without first calling him. I apologized and told him my condition was critical.

He asked for my location and told me he will send police officers to me. He sent DCO 1 , DCO 2 and S.O, all from C Division Asaba.

They arrested  two police officers, the other two ran away (BBI is investigating to get the names of all the officers and will be provided next update).

After the arrest, they abandoned me. I took myself to the hospital. I have never experienced such in my life. They naked me in the public, assaulted me and said I can't do anything.

Am calling on Behind Bars Defenders to please get Justice for me and bring the officers to book".

Behind Bars Defenders and My Body My Rights Initiative has launched a full investigations. The officers involved in assaulting Muhammad Uba will be brought to book and prosecuted to serve as deterrent to other officers. 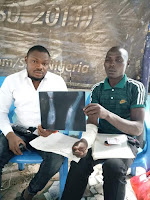 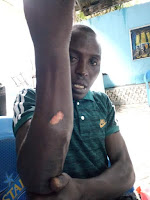 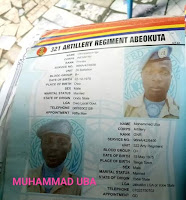 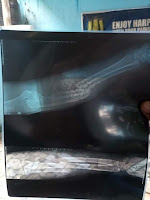