They complained the vehicle chasis number wasn't complete and the vehicle is suspected to be stolen. They kept them waiting and in other to play safe with Armed men in a lonely area, they decided to play along with them. They met one of the officers and asked to know the way forward but was shocked to hear them demand for N500,000.

They pleaded with them to verify the vehicle document that the error was from license office and complaint have been made regarding the chasis number. They became furious and dragged them into their Hilux van to Area Command Ughelli. Their phones seized. They became helpless and didn't want to be charged with frivolous charges. FAST FORWARD.                        They drove them to ATM machine where they withdrew N100,000  and another N100,000 from first bank Ughelli and handed.

Before handing the money to them, BBI Uncover Agent (Name withheld) was standby capturing them on camera.

BBI have issued them 5hours to return the Money.

The video will be uploaded soon. 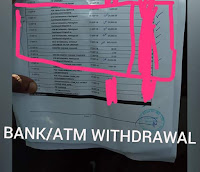