The Bayelsa State Vigilante Service said it will continue to sustain its current efforts aimed at eradicating crimes at various parts of the state.

Chairman of the Service, Evangelist Parkins Ogede, said this while parading an armed robbery suspect, one Mr. Lucky David-Ozuowe, 34, from Delta state before newsmen at the Service Headquarters in Yenagoa.

He said the suspect and two of his accomplices still at large, snatched a Sianna from their victim at a gunpoint in Delta State during an armed robbery operation in Bayelsa the state.

According to him, the victim who used car tracking device to ascertain the actual position of his stolen vehicle, indicated that it was in Bayelsa state.

Evangelist Ogede explained that, the victim reported the incident to the service who immediately swing into action that culminated to his apprehension along Sani Abacha Expressway.

The Security Chief maintained that the suspect and his accomplices were targeting their victim in a false pretense of repairing their stolen vehicle.

In sighting the Vigilantes, the armed robbers, according to Evangelist Ogede took to their hills but his gallant men gave them a hot chase which led to the arrest of one of the suspects.

He said a double barrel revolving gun and the stolen car were recovered and the suspect is now cooling off with the police authorities. 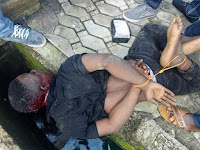 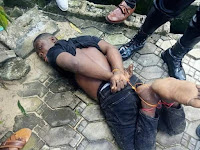 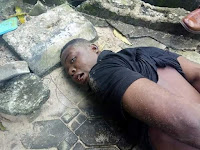