Priests, Religious and Lay faithful of the Catholic Diocese of Warri on Wednesday, September 19, 2018 woke up to receive a devastating news that threw everyone into mourning as the news of the death of Very Rev. Fr. Dr. Louis Odudu, Chaplain of the Seat of Wisdom Catholic Chaplaincy, Petroleum Training Institute PTI, Effurun in Delta State was confirmed.
His demised was confirmed by Rev. Fr. Dr. Benedict Ukutegbe, director of Social Communications, Catholic diocese of Warri.
The deceased priest who was kidnapped on Friday, September 14 and released on Saturday, September 15, 2018 died just four days after his freedom from his abductors.
Very Rev. Fr. Dr. Louis Odudu was ordained priest for the  Catholic diocese of Warri in 1987 and until his death, he has served the Church at various capacities within and outside the diocese.
He worked as an Assistant Secretary-General at the Catholic Secretariat of Nigeria CSN, for about ten years and went on two years sabbatical in the UK before returning back to his home diocese of Warri in 2018.
He was assigned to the chaplaincy at PTI as the chaplain about two months before his kidnap and untimely death.
It was indeed a black Wednesday for the diocese of Warri as Very Rev. Fr. Louis Odudu died on the day the diocese is holding a vigil of prayers for one of her deceased priest, Very Rev. Fr. Stephen Ekakabor who died early this month after battling with brain injury he sustained when he was attacked by armed robbers that invaded the priest rectory in 2017 at his parish of St. Joseph, Okpare-Olomu in Ughelli South Local Government Area.
The death of Very Rev. Fr. Dr.  Louis Odudu was received by all with great shock as his freedom from his abductors is still been celebrated when the news of his death filtered in.

May his priestly soul rest in #perfect peace. 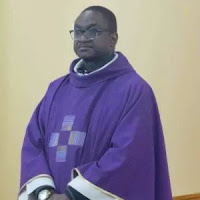