Baba Jibril took to Facebook to share the story of a driver who was almost killed today in Kaduna by mob because he wanted to safe his Christian passengers.Below is what he wrote..

'Another 24hrs Curfew in kaduna.

In a blink of an eye, I saw them tropping out en mass from God knows where with  dangerous weapons, by this time they have already blocked the kaura motors junction on Nnamdi Azikwe Espress bypass. I couldn't recognize any of them, they surely are not from that area. They started blocking cars plying the road looking for whom to kill, I was terrified beyond imagination. Then I saw a car coming, a saloon golf with a blue colour approaching, they tried to stop him, he refused because all six of his Passengers were christains, he could survive it but what will happen to his six christain passengers? He thought, I believe.

They did all they could to force him to stop but were unable, they resorted to violently using the weapon on him until he manouver his way to the nearest police station with the help of us. This is our reality and this is sad.. I couldn't believe what my eyes saw this morning.

May God heal this brave and kindhearted Fellow, May he be rewarded beyond his reach.

Peace is the only option we have and we must do everything to see it happen'. 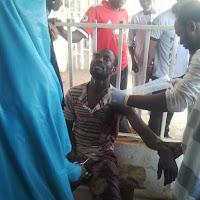 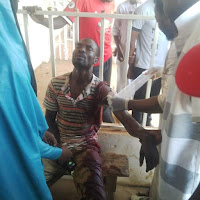 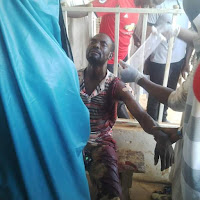