 Home   NEWS  See how a lady,air force officer and others were almost killed during Kaduna crisis(Photos)

See how a lady,air force officer and others were almost killed during Kaduna crisis(Photos)

A lady identified as Nanmeta Anthony took to Facebook to share the story of how she was almost killed alongside a Christian air force driver and others during Kaduna crisis.Below is what she narrated(the story is a little bit long)....

'UNTIL GOD SAYS IS OVER, IT IS NOT OVER YET.
Nanmeta and the kaduna state crisis.

At about exactly 4:50pm yesterday the 21st October, 2018 we left the base(Airforce) for Rigasa to drop my kd moma's frnd who came to visit her.  While on our way to the train station, we got stocked in the mist of the crisis (terribly).  Approaching the huge number of them by the road(Muslims at Angwan ruwa express by Danapa filling, station) no u-turn and few of them came closer to the car and couldn't view us cos the car is tinted(you wouldn't believe that we forgot to put the car on central luck)the muslim guy beside flying officer Sani who was driving us was really curious to know who were in the car and forcefully open the driver side and  immediately he opened and discovered we are Christians, he began breaking d glass and others standing from the other side all came on us (some with knife, matchets and stones)  they began breaking the car on us and they also open my side and began to drag me out of the car but thank God i was on sit belt and also managed to hold d handle at upside of the car with my left hand and they couldn't succeed. Hmnn. Funny enough, one guy was struggling to drag out d driver but he was strong enough to use his right hand to change gear and immediately drove off with speed (thank God they where not with guns). We kept moving with speed crossing all the the road blocked and our car almost summersaulted  plenty times and finally stoped in the middle of the road and all we saw was them coming on us again from all directions (hmnn).  God decided to move the again and we zoomed off.

Approaching the road again.My God,  there were more than 100 of them if I can count and there was no way we could hav escaped that crowd except we climbed them with the car to either survive or die but God sent an angel we can't explain. A young boy maybe 18-20year old boy standing by the entrance of their area (harmless) and the guy screamed (ku binan! Ku binan)meaning, follow here!  Follow here and bcos we hav no choice we followed the road and the inhumans where still after us but d guy who directed us stop them (only God knows what he told them that they had to go back to the main road). This boy kept following us on foot directing us to only where God knows. Hmnn!

On reaching one house while still driving into the area, we met some men standing by their gate and they asked where we were coming from and going to and we all responded Airforce base. This good Samaritan Muslim family open there gate for us instantly(hmnnn). God bless their wives. They gave me and moma their jalabia(overall).

It didn't end there cos we thought we had escaped but naaaa, they were still looking for us and the only option was to jumpt into the next compound through the fence. Thank God the woman we were taking to the train station is also is a Muslim woman so we left her in the first house (only myself, ma Momi Mrs Kutan and Flying officer Sani the driver who is also a Christian)jump into the next compound through the fence. Hmnn, immediately we left they actually came and was asking for the owners of the car, she told them it belongs to her and they asked of the guy(Flying officer Sani) driving and they told them he went to mosque to pray cos it was almost 6:30pm. They left and came back to that same house again insisting they saw a lady with red skirt and long hair where has she entered cos we saw her in the car(Nanmeta) but they told them if only I haven't been killed cos I ran out of the car into the area immediately I discovered the place wasn't saved for me. Hmnnn, they entered the house searching for me everywhere but to no avail and they put teargass in the house and left Hmnn!

While waiting for the airforce patrol that were deployed to come and pick us after calling them, (thank God the cowards have gone to pray) even though we heard they said they will come after prayers to search every single house and everyone will do SALATI if not na die(hmnn). The God almighty use the man that first hide us to go get police men before they finished their prayers and thank God he brought them in good time and they took us out of the area and on reaching the main road at about 7:30-8pm, Airforce operation yaki were already at the junction trying to reach us that was how the police men handed us over to them and they brought us to the base.

Finally, Thank God non of us were killed.
We only  sustain injuries from the broken glasses and the fence climbing.
To the glory of God we are strong and fine.

Toh! Facebook wuna Weldon for not allowing me finish my typing and even editing my wrk hmnn! u guys just uploaded it without ma permission and now it took me time to be able to come edit. Wuna thank u sha. 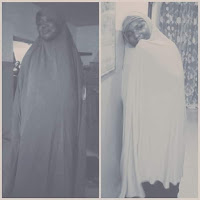 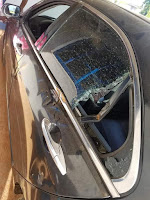 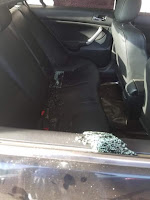 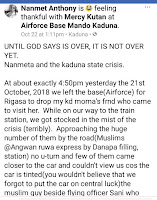 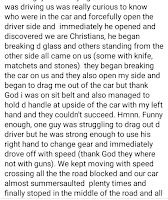 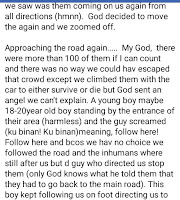 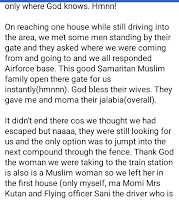 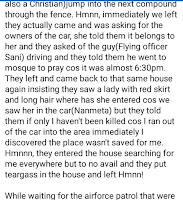 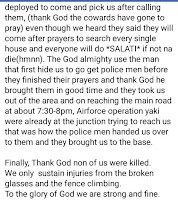 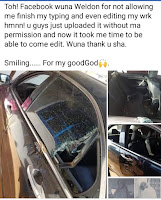