GOVERNOR TAMBUWAL ATTENDS FUNERAL OF 26 PERSONS KILLED BY BANDITS
IN GANDI DISTRICT
Sokoto state Governor Rt hon. Aminu waziri Tambuwal was among dignitaries that attended the funeral prayer for the 26 persona killed  by armed bandits in three communities of Gandi District in Rabah Local government.
The funeral prayer held at Gandhi cemetery for victims from Warwana,Kursa and Dutsi villages was also attended by the state Deputy Governor hon. Manir Dan-Iya,Former Governor Alh Attahiru Dalhatu Bafarawa Representatives of sultan, PDP Leaders and senior government officials.
Condoling the family, people of Rabah Local government at the palace of the District Head of Gandi Alh.Maccido Governor Tambuwal prayed Allah to forgive the deceased persons all their short comings and grant their families the fortitude to bear the loss.
Tambuwal appealed to the communities in the state to always report auspicious movements in their areas to the security agencies for necessary actions.and coorporatewith them for successful discharge of their duties.
Governor Tambuwal assured that government would take adequate care of the refugees.adding that government would also ensure adequate protection for lives and property of citizens
Special prayers for the repose of the souls of the deceased persons were offered by ulamas.
May Allah grant them a place in Paradise ameen. 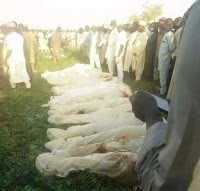 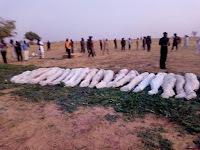 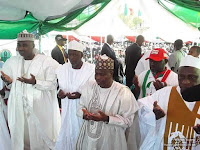 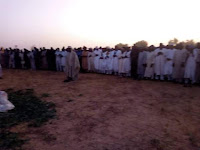