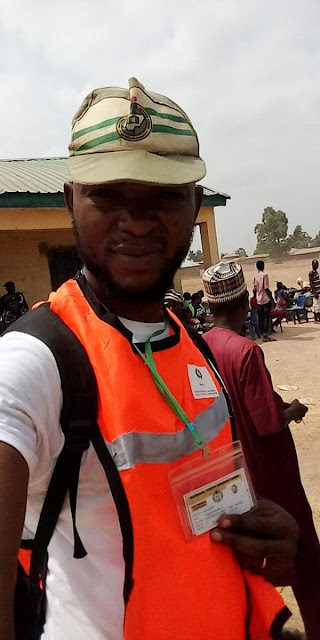 As shared by Timothy....
'This is the last time I'd be doing this bullshit INEC ad-hoc nonsense.
Having disenfrachised myself in the name of ad-hoc staff,  I was almost thoroughly beaten.
I was cowed into submitting the bulk of ballot papers for mass thumbprinting.
Well,  I filled the incidence form and I hope the result would be cancelled.
I'm just angry with everything most especially for getting involved in the first place.
No one forced me actually.
First, this cardreader rubbish should be quashed in subsequent elections.
The whole aim has been defeated.
Out of about 900 registered voters in my unit,  the cardreader could  authenticate only 15.
The rest had to do manual accreditation, which opened more room for rigging. Quite sad!
This Prof. Mahmood has to resign immediately after this elections and apologize to Nigerians.
The extra 1 week he got did not prove anything different. In fact he's made Jega's INEC much more coveted.
As at 11am, we had not seen materials, the people were already agitated,  thinking we were compromised...they started threatening to descend on us...luckily we escaped that.
Because we reported late at the polling unit, we were forced to extend voting time till around7:30pm.
When it was dark,  this people requested for the remaining ballot papers,  that is the tradition of the polling unit not to return ballot papers to INEC...before we knew it, the atmosphere became very tensed.
The short of it is that we allowed them to do their wish but I pray the result is cancelled.
The fact is,  most of rigging is done in the rural areas. There,  there is no electoral laws,  anything goes... Party agents do the voting for people and you don't dare talk.
We must penetrate the grassroots if we must overcome this plague.
I'm glad I returned safely' 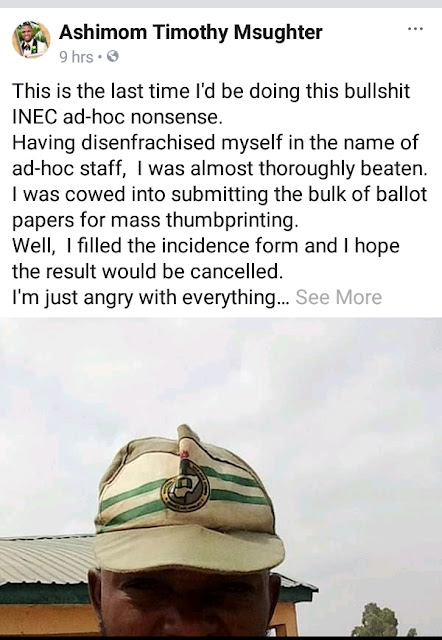