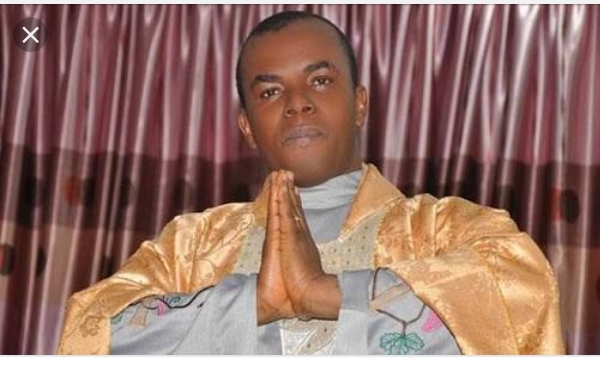 I am listening to Father Mbaka's live E No Dey Program.He spoke about Buhari's victory.Below are some of the things he said......
1. He started by praising God with songs and praises for a prayer answered.
2. According to him,if the election was won by Atiku,Adoration Ministry will be closed.
3. He said because of Peter Obi,the world insulted the altar of God.According to him,the God of Elijah and Elisha is his God.Mbaka said during the time of Elijah,people listened to him.He said Elijah's God is his God.He was asking how many lions will somebody kill before you call him a lion killer.
4. He said he told Peter Obi the truth and many people were expecting him to paint words so that they will call him a real prophet.According to him,he said the spirit of prophecy has been with him since childhood.He said it is not a matter of being a reverend father but everybody has his gift.He urged Nigerians to learn to respect people's gift.
5. Speaking further,he said the spirit of who will be a president has been coming from the altar.He told Nigerians to learn a lesson from it.He also said that people said he prophecy because of money but they don't know the man Mbaka.Mbaka said he has no monetary gain from all the prophecies.
6. He said there is no way you will insult the altar of God(Elijah) and go scotfree.According to him,his altar stands for Elijah's altar.He recalled how he told charismatics last two weeks that Peter Obi/Atiku won't win.
7. He said he is not an INEC official.According to him,after a match some people will criticise the referee.
8. He recalled what happened during his primary school days.According to him,during his primary school days,prophets from Cherubim will come to their school and asked his teachers to give them minutes to hours to see him for prophecy.At the end all the prophecies will come to true.
9. He also said the prophecy does not come from him.He never knew how they happen but from God.According to him,during Abacha's time he was speaking against Abacha.Some top church members and pastors were attacking him until one Wednesday he mounted the pulpit and the prophecy came that Abacha will die the next day.A brigadier general called him from Aso Rock and questioned him about the prophecy.He told him that he did not say such but Holy Spirit said so.Parishioners were saying he should close his mouth.He told them to wait until tomorrow.It happened exactly the way he said.He said while speaking all these,he does not know how it happens but the spirit in him speaks.He said Catholic church is a prophetic church and should be respected.He also recalled how he said Yaradua will die.
10.  He said there is no way he will take you to his altar and say you will win without ruling.
11. He said he wants to prove to the world that there is God in Catholic church.Speaking further,you should give respects to prophets.The die and wake almost every time.Speaking further,he argued that a prophet does not eat what others eat.A prophet can stay two or more weeks without eating anything.He recalled how he returned the 500k Peter Obi donated(he said it has consequences when a prophet rejects your gift).
He revealed that the gifts are more than him/even scared of the gifts.speaking further,he said the language of the Holy Spirit is only understood when Holy Spirit  is in you.
12. He said what happened to Atiku/Obi is spiritual.According to him,he saw Atiku faced down while Buhari was smiling i the spiritual world.Mbaka said he's covenant child and not bothered by what people say.He gave example with prophets of Baal and Elijah in the bible.He also said that some priests came to him and urged him to forgive Peter Obi.He told them that he has forgiven him but he can not win election.He said his team is the winning team and recalled how he told people in Enugu that Buhari will win with or without their votes.He said Adoration Ministry is too sacred and Holy Spirit's apple of eyes.He recalled how he went to Lagos recently and priests were arguing about his prophecy.He told them that they should wait until February(ie when to know the authenticity of the prophecy).He asked what will happen to all the people that said he should be sanctioned if Atiku wins.He also said that this is the beginning of Peter Obi's political downfall unless he comes to Adoration Ministry and apologise
More details later
Loading...
">