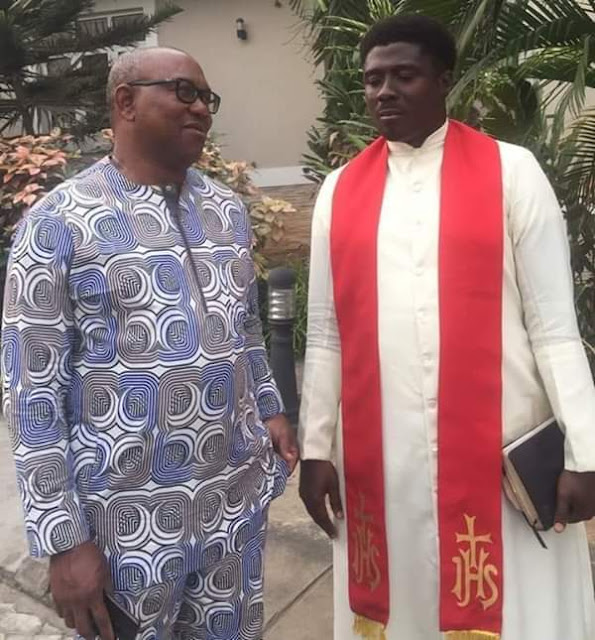 By Mr. Valentine Obienyem
Calmness is a virtue, live from Agulu
I had returned to Agulu yesterday for the election, suddenly we started hearing about election postponement. Because it was an editor of a national newspaper that called to tell me this, I knew it was true.
How can INEC convince anybody that it suddenly discovered its unpreparedness on the day of the election? What of foreign observers already in the country? What of those that travelled home from their destinations?  What of those contesting that had already paid their agents?   There are many questions begging for answers.
Early this morning I came to  Mr. Peter Obi's house to know the next line of action. Knowing what happened, any person in his shoes will naturally feel pensive and even look morose , but from my long association with him, he remains calm at worst situations that will ordinarily derive other men out of their wits.
Confirming what I have always known about him, on reaching the house, I was told he left early for morning mass. I called his PA to get me his picture with the Rev. Fr. that celebrated mass. I did this as my contribution to evangelization and to exhort  and encourage those of us, including my humble self,  that are yet to embrace daily masses.
When he came back from mass, I jokingly told him he was looking relaxed when every other person was almost mourning. Always exemplifying calmness, he calmly replied: "Val nothing has changed about my belief that God's will is supreme at all times," he always speaks like a God-intoxicated man, which is worthy of imitation.
Obi's calmness and approach to life is so amazing that Nigerians are looking forward to   experience the touch of that amazing man.
Loading...
">