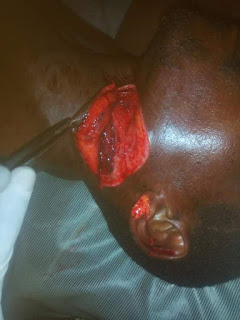 A 21yr old has 'macheted' his  father in Cross River for sleeping with another woman.According to report,the man in the picture was 'macheted' by his first son when he caught him pants down with a single mother of two.

The boy came to the scene with his mother after they were alerted by a neighbor. Fighting started when the boy's mother held his father's side chick(adultery mate) and started slapping her on the face.

The boy became angry and used the machete when his dad came to separate the two fighting women and out of anger, slapped his wife on her cheek.

This narrowly missed the carotid artery and jugular veins in the neck. 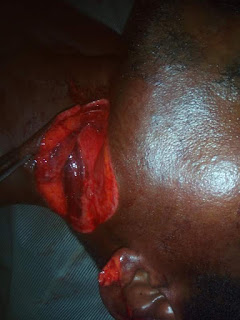