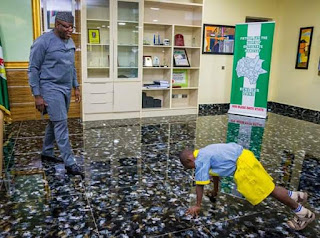 Government business was put on hold last week when Dr. Fayemi welcomed 7-year-old school boy, Daniel Olutope, to his office in fulfilment of the governor’s invitation to visit when he was in Daniel’s school earlier in May this year.
Fate brought the duo together on 7th May when the governor had lunch with pupils of St. Michael's African Primary School, Ado-Ekiti. Daniel chatted so intelligently that Mr Governor asked if he could be his friend and possibly visit him at home. Daniel agreed and promised that his mother will bring him on a visit. However, Mrs Oluwatoyin Olutope Adaramodu, Daniel’s mum did not believe her son when he got home and told his mum that his new friend, Mr Governor, invited him to visit.
A few months after the meeting, Governor Fayemi instructed his aides to re-visit Daniel’s school and bring him to his office. Daniel was accompanied by his mother, Mrs Oluwatoyin Olutope and his teacher, Mrs Dupe Adeosun to the Governor’s office in Ado Ekiti for what turned into an opportunity for young Daniel to briefly act as Governor.
”Do you remember me, the man who lives on top of the hill?”Governor Fayemi asked Daniel on arrival to which his young friend responded, “yes”. The Governor then led Daniel to his desk and lifted him into his chair, pulled him to his desk and shook his hand “Your Excellency sir”, Dr Fayemi fondly addressed him.
Mr Governor asked if Daniel would love to be Governor when he grows up and Daniel agreed. The governor therefore encouraged him to work hard at his studies so his dream can come true.
Daniel’s mother, Mrs Olutope said the visit was surreal to her and she was elated to see her son sitting in the Governor’s chair, a sign that her child could be governor in future like Dr Kayode Fayemi. She prayed for the governor’s success and thanked him for his kindness to her son.
Daniel’s teacher, Mrs Adeosun commended the governor for inviting her alongside the boy; stating that such gesture would not only encourage other teachers but also raise hope in pupils that they too could become great in future.
Dr Fayemi has since been making necessary interventions to ensure that public schools have not only adequate funding, world-class physical structures, and functional teaching equipment, but also the right nutrition programme that supports the education of the young ones. 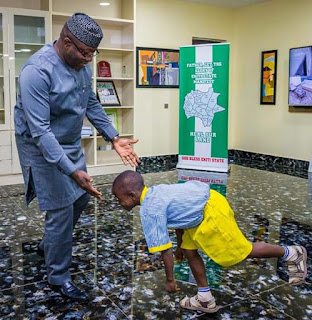 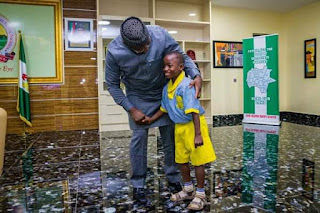 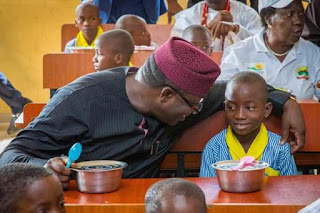 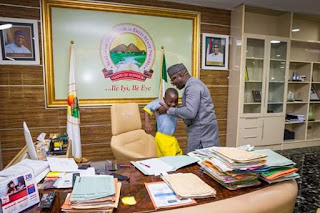 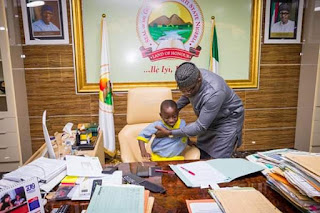 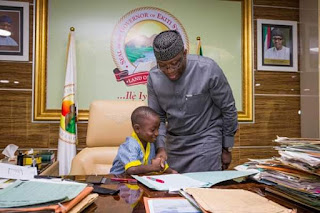 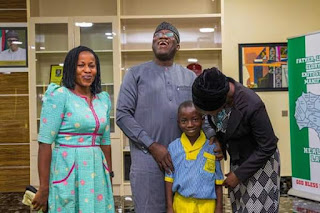